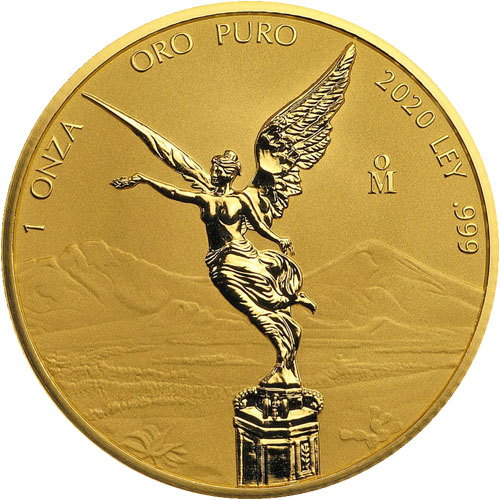 Gold Libertads from the Mexican Mint come in three versions each year. The first coin offered in the series was the Brilliant Uncirculated coin introduced in 1981. That was followed by the release of the Proof Gold Libertad over the course of several years. In 2018, the mint introduced reverse proof coins for the first time ever in two of the five weights in the series. Right now, 2020 1 oz Reverse Proof Gold Mexican Libertads are available to purchase online at Silver.com.

The obverse of 2020 Reverse Proof Gold Libertads comes with a depiction of Winged Victory. The statue of Winged Victory, as shown here, comes from the top of the Mexican Independence Victory Column. The statue itself is made from copper and was produced in 1911 to mark the start of the 100th anniversary of the beginning of the fight for independence in Mexico. The column was later constructed in 1921 to mark a century of independence, with Winged Victory elevated to its peak.

On the reverse side of the 2020 1 oz Reverse Proof Gold Mexican Libertad is a depiction of the modern coat of arms of Mexico. The design field includes the modern seal of the nation in the center, with a total of 10 historic versions of the seal surrounding it in a circle around the edge of the design field.

If you have any questions, Silver.com customer service is happy to help. We are available to you on the phone at 888-989-7223, online using our live chat, and via our email address.