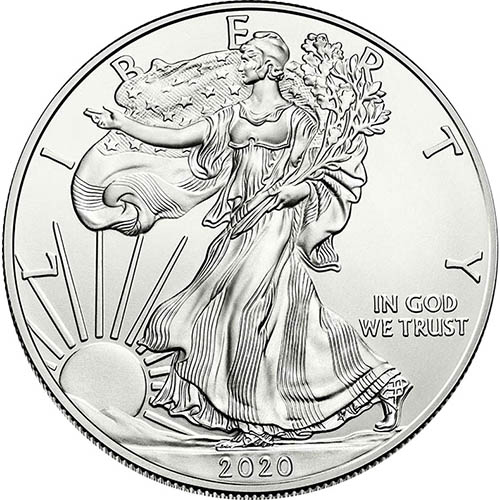 Among the many 1 oz silver bullion coins for sale, the most popular is the Silver American Eagle from the United States Mint. Produced in an investment-grade option in every year since its 1986 introduction, the Silver Eagles have been a steady option for silver buyers for more than three decades. Now, 2020 1 oz Silver American Eagle Coins are available to you for purchase online at Silver.com.

Silver American Eagle coins were introduced by the United States Mint in 1986. The coins are only available in 1 oz silver weights and were originally offered as bullion or proof options for investors and collectors. In 2006, the US Mint introduced the Burnished Silver Eagle coin to go along with the Proof Silver Eagle as a second collectible option.

On the obverse of 2020 1 oz Silver American Eagle Coins, you will find the image of Walking Liberty. Created in 1916 by Adolph A. Weinman, this design featured on the Walking Liberty Half Dollar from 1916 to 1947. The popular design depicts Liberty moving toward the sun on the horizon as a symbol of the nation’s constant movement toward a brighter future.

The reverse of 2020 Silver American Eagles includes the heraldic eagle of the United States. This is one of the oldest coin designs from the US Mint and featured on the first gold coins produced by the US Mint in 1792. This modern version of the symbol was created in 1986 for the Silver Eagle Series by John Mercanti.

These 2020 1 oz Silver American Eagle Coins are available to you with protective plastic flips for individual coins. Multiples are offered in tubes of 20 coins or Monster Boxes of 500 coins, with the box holding a total of 25 individual tubes of 20 coins each. All 2020 Silver American Eagle coins in this listing are in Brilliant Uncirculated condition.

We encourage Silver.com customers to call us at 888-989-7223 with questions. You can also connect with us on the web through our live chat and email address features.