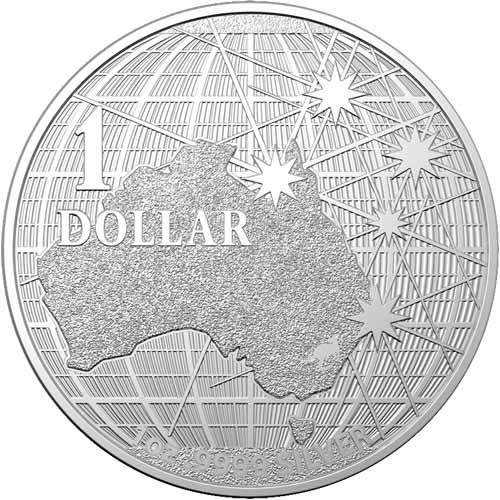 Known officially as the Crux, the Southern Cross is a star constellation that centers on four particular stars and is visible in the southern sky throughout a bright portion of the Milky Way. Its apparent visual magnitude is brighter than +2.8, making it one of the brightest and most easily distinguished star constellations in our universe even though it is the smallest of the 88 known modern constellations.

The obverse side of 2020 1 oz Silver Australian Beneath the Southern Skies Coins includes a depiction of Queen Elizabeth II. Featured in right-profile relief, the Queen is shown here with the George IV State Diadem Crown on her head and her shoulders visible in the design for the first time since 1966 on Australian coins.

On the reverse face of the 2020 Silver Australian Beneath the Southern Skies Coins, you will find an outline of the Australian continent. The face value is inscribed in the upper-left field above the continent with the Southern Cross constellation to the right of the continent. The background field on both sides of the coin is the same showing the longitude and latitude lines of the globe.

These 2020 1 oz Silver Australian Beneath the Southern Skies Coins are available to purchase individually or in bulk packages. The individual coins ship inside of plastic capsules, with multiples housed in sealed rolls of 10 coins or boxes of 240 coins with 24 rolls of 10 coins each.

Silver.com is available to talk to you at 888-989-7223 if you have questions about silver for sale. You can also connect to us online through our live chat and email address features.