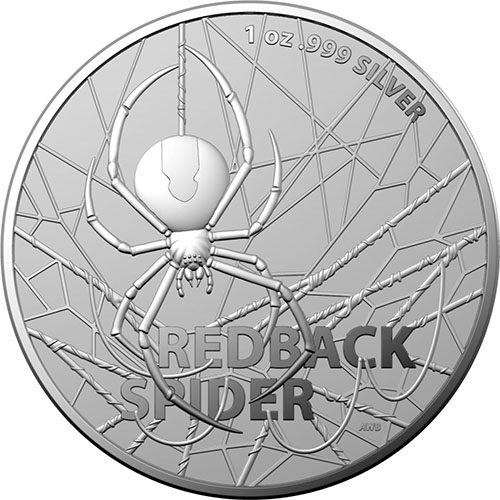 Redback spiders are known as the Australian black widow. One of the world’s most venomous spiders, the redback spider is particularly menacing in Australia because of its preference for human structures. The female redback prefers warm, sheltered locations and commonly builds webs and nests near or in human residences. Today, 2020 1 oz Silver Australian Redback Spider Coins are available to you online at Silver.com.

Predominantly nocturnal, the female redback spider largely preys on insects, spiders, and small vertebrates that find themselves ensnared in its web. The spiders kill prey by injecting them with a complex venom. When humans are bitten by the redback spider, the venom typically gives rise to a syndrome known as latrodectism. The condition starts with pain around the bit and progresses up the bitten limb over 24 hours. Eventually, humans suffer from nausea, vomiting, headache, and agitation.

All 2020 1 oz Silver Australian Redback Spider Coins are available to you in Brilliant Uncirculated condition. The coins are housed individually inside of protective plastic capsules and feature an iconic reverse design previously used by the Royal Australian Mint on proof silver coins.

On the obverse of 2020 Silver Australian Redback Spider Coins is the image of Queen Elizabeth II. Her Majesty is the longest-reigning monarch of England the Commonwealth nations. Her title as the sovereign of Australia is officially that of Queen of Australia, though the government has a parliament and prime minister that lead official affairs for the nation. This is the latest portrait for Australian coins and was sculpted by Jody Clark.

The reverse of the 2020 1 oz Silver Australian Redback Spider Coins includes the image of a female member of the species. The female redback spider has black coloration and features a distinctive hourglass-shaped red patch on its belly.

Founded in 1965, the Royal Australian Mint is the sovereign mint of the federal government of Australia. The mint replaced the Royal Mint system previously operating on the continent and led to the closure of the Melbourne Mint when it opened in 1965. The Perth Mint is the only remaining mint from that system in operation, but it is not affiliated directly with the federal government.

Please don’t hesitate to ask questions of Silver.com customer service. Our team is available to you at 888-989-7223, online using our live chat, and via our email address.