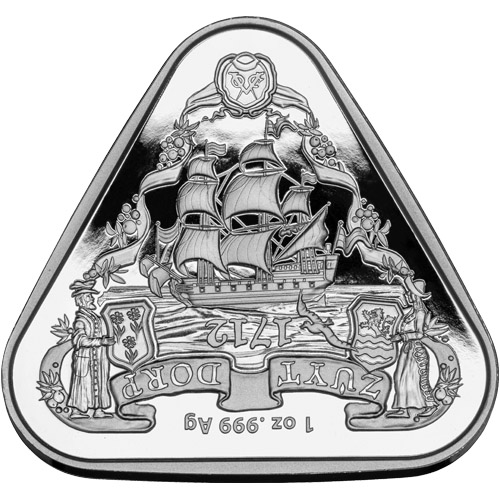 The Zuytdorp was a ship of the Dutch East India Company that famously disappeared in the 18th century bearing a load of recently-minted silver coins. The ship was named for an extant village in Zeeland, Netherlands, and departed from the region in August 1711 headed for Batavia with its valuable silver coins in tow. Right now, 2020 1 oz Silver Australian Shipwreck Zuytdorp Coins are available to purchase online at Silver.com.

The Silver Australian Shipwreck Series catalogs the famous shipwrecks that have occurred along the coast of Australia. The Zuytdorp is one of the many shipwrecks that remained cloaked in mystery for centuries following the disappearance of the ship. The Zuytdorp departed the Netherlands in August 1711 destined for Batavia, but was never seen again after rounding the Cape of Good Hope.

Zuytdorp disappeared sometime in 1712 with no historical records of its sinking or capture. Many assumed the Zuytdorp was captured by pirates as it was carrying a load of silver coins to Batavia, the trading port of the Dutch East India Company.

The obverse side of 2020 1 oz Silver Australian Shipwreck Zuytdorp Coins features a right-profile bust of Queen Elizabeth II. This bust of the Queen is situated above a scene of carnage that many have assumed played out when the Zuytdorp sank. Silver coins are strewn along the ocean bottom with a human skeleton nearby. Above the waterline, survivors attempt to pull one another aboard a life raft as another survivor attempts to scale a sheer cliff wall along the rocky coast of Western Australia.

On the reverse face of the 2020 1 oz Silver Australian Shipwreck Zuytdorp Coin is a depiction of the Zuytdorp. The large ship wrecked sometime in 1712 along an area now known as the Zuytdorp Cliffs north of Perth along the coast of the state of Western Australia.

The Zuytdorp’s fate was first mentioned in 1834 when Aborigines mentioned a wreck to farmers near Perth. The colonists dispatched a rescue party, but finding no recent wreck gave up on the search. In 1927, the wreckage of the ship beneath the waters was first spotted from a high clifftop. The site was first visited in 1941 and explored in 1954, with a positive identification made courtesy of the silver coins found amidst the wreckage. The coins had a “1711” date and “Zeeland” inscribed.

If you have any questions, Silver.com customer service is available to assist you. Our team is available on the phone at 888-989-7223, online using our live chat, and via our email address.