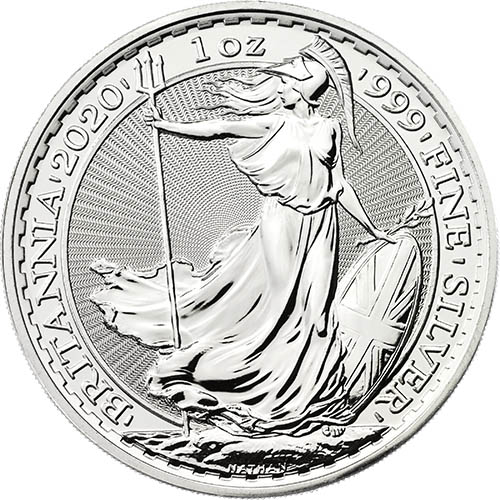 Among the most popular silver coins for sale right now is the Silver British Britannia from the Royal Mint of England. Bearing one of the oldest British coin designs still in use, the Britannia Series from the mint launched in 1987 with a gold coin, expanded in 1997 with these silver coins, and have since grown to include a platinum bullion coin. Today, 2020 1 oz Silver British Britannia Coins are available to you online at Silver.com.

The Royal Mint of England introduced the Britannia Series in 1987 with a gold coin. This now-iconic series features the historic image of Britannia, a figure known as the female personification of the British people and Britain itself. The name derives from the Ancient Latin language of the Romans and the term the empire used to refer to the province once its forces had invaded the British Isles during the 1st century AD.

Britannia was first used on British coins in the 18th century following the Union of Scotland and England in 1707. This marked the official, legal binding of the crowns of England and Scotland. Britannia was used on coinage starting at this time and would continue to feature from time to time in the centuries to come.

On the reverse of 2020 Silver British Britannia Coins is the image of her figure as she stands at the coast of England watching out for danger and defending the isles. Wearing a Corinthian helmet, Britannia wields a trident in her right hand to control the seas and has a shield resting beneath her left hand that features the Union Jack.

The obverse of 2020 1 oz Silver British Britannia Coins includes the fifth-generation effigy of Queen Elizabeth II. Designed in 2015 by Jody Clark, this right-profile portrait showcases the Queen at the age of 89 wearing the Royal Diadem crown.

Please feel free to contact Silver.com if you have questions. You can call us at 888-989-7223, chat with us live online, or email us directly.