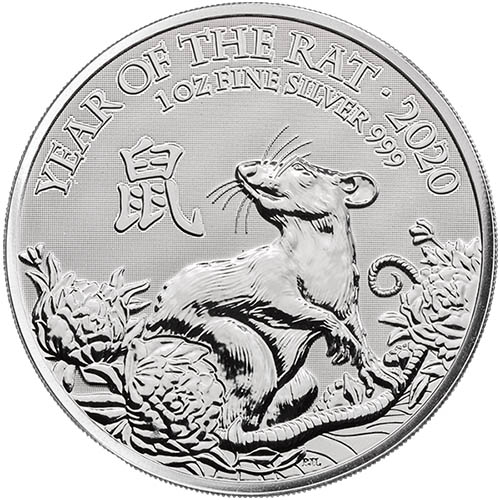 Ancient Chinese myth suggests that the animals of the Zodiac were placed in order in the 12-year cycle based upon their arrival following the Great Race to meet the Jade Emperor. The first animal in the cycle is the rat, which arrived first because it tricked the ox into giving it a ride only to jump off and finish first. Seventh in the Shengxiao Series, the 2020 1 oz Silver British Lunar Year of the Rat Coin is now available to you for purchase online at Silver.com.

The coins in the Shengxiao Series from the Royal Mint of England all have mintage figures that end in eight or feature various eights. The number eight is considered lucky in Chinese culture and the gift of money during the Lunar New Year in China is also considered good luck for the year ahead. The choice of 138,888 for this mintage reflects that important meaning behind the number eight.

Each new release in the Shengxiao Series comes with a distinct design. The Year of the Rat is the first in the 12-year cycle of the Zodiac and is accompanied by a new design. People born under this sign are considered intelligent, adaptable, and optimistic.

On the reverse side of the 2020 1 oz Silver British Lunar Year of the Rat Coin is the image of a single rat foraging amidst foliage for some food. The rat has stopped and lifted its snout in the air, no doubt seeking to detect a threat by scent before it becomes a victim.

The obverse face of 2020 Silver British Lunar Year of the Rat Coin features the fifth-generation effigy of Queen Elizabeth II. This right-profile portrait from Jody Clark was created in July 2015 and debuted on British coins in 2016. It captures the image of Her Majesty at the age of 89 and she is shown wearing the Royal Diadem crown.

These 2020 1 oz Silver British Lunar Year of the Rat Coins are available in Brilliant Uncirculated condition. The coins are housed individually in plastic capsules or in sealed rolls of 20 coins.

We encourage you to reach out to Silver.com customer service if you have any questions when you buy silver. We are available at 888-989-7223, online using our live chat, and via our email address.