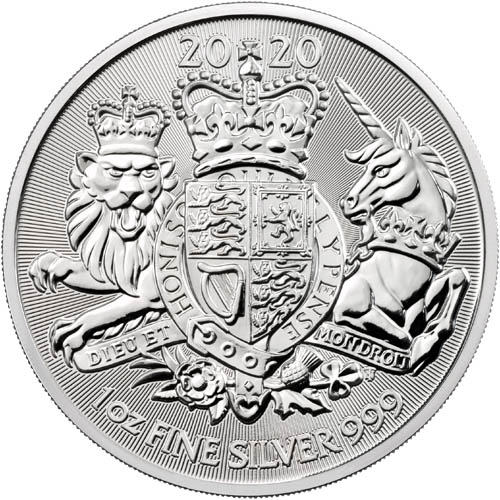 The Royal Arms of England is the official emblem of the monarch of the kingdom. A personal symbol of the reigning monarch, the Royal Arms of England includes the symbols of the various member states that make up the modern United Kingdom. These symbols are the coat of arms for the independent states of Northern Ireland, Scotland, and England. Today, the 2020 1 oz Silver British Royal Arms Coin is available to you online at Silver.com.

The first official Royal Arms of England came from King Richard I, the second Plantagenet King of England. Richard I’s Royal Arms came from battle standards that his forces carried into war. He had previously used one or two lions in a rampant pose on shields, but the eventual Three Lions he adopted included a red field with three golden lions in a passant guardant pose instead.

All of the 2020 1 oz Silver British Royal Arms Coins in this product listing come to you in Brilliant Uncirculated condition from the mint. The coins are housed individually inside of protective flips, inside of mint tubes of 25 coins, or inside of Monster Boxes of 500 coins. The Monster Box packages the 500 coins in 20 tubes of 25 coins each.

On the obverse side of the 2020 1 oz Silver British Royal Arms Coin, you will find the latest effigy of Queen Elizabeth II. Queen of England since 1952, this is the fifth iteration of the Queen’s portrait to appear on British denominations during her reign. Created in 2015 by Jody Clark, this right-profile bust of the Queen depicts Her Majesty at the age of 89.

Please feel free to reach out to Silver.com if you have questions about these silver coins for sale. You can call us at 888-989-7223, chat with us live online, or email us directly.