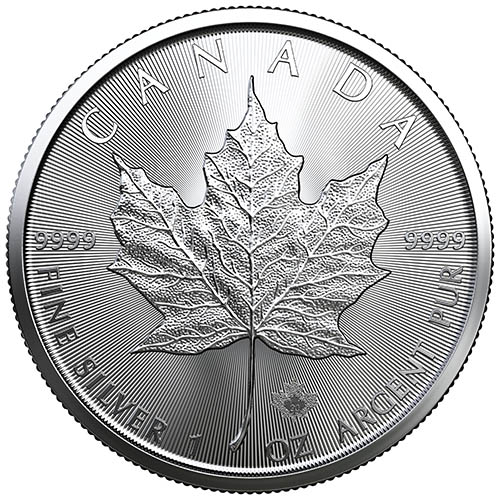 Each of the 2020 1 oz Silver Canadian Maple Leafs in this product listing is in Brilliant Uncirculated condition. Individual coins come with a protective plastic flip while multiples ship inside of either tubes of 25 coins or Monster Boxes of 500 coins. The Monster Box includes a total of 20 tubes.

On the obverse of 2020 Silver Canadian Maple Leafs is the effigy of Queen Elizabeth II. Her Majesty is the longest-reigning monarch in the history of Britain and has been on the throne since 1952 when her father, King George VI, died. This right-profile bust of the Queen is the fourth-generation design and was created in 2003.

Founded in 1908, the Royal Canadian Mint is the official sovereign mint of Canada. It originally operated out of the Ottawa Mint and now has a secondary facility in the Winnipeg Mint. The Ottawa Mint bears sole responsibility for coining bullion and numismatic coins for Canada.

If you have any questions, Silver.com is available to help. You can call us at 888-989-7223, chat with us live online, or email us directly.

Images shown are examples only. Actual item appearance is subject to change, but will always correlate with title and descript