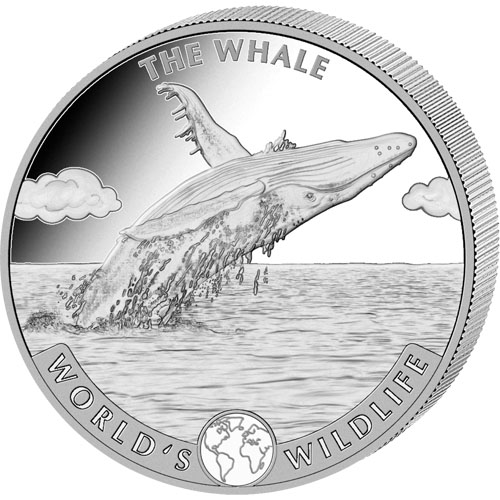 The Democratic Republic of Congo is the nation of issue for the new World’s Wildlife Series. Released in 2019, the series celebrates some of the more majestic animal species found on planet Earth. In particular, these animals are also some of the world’s many endangered species. In the second release of the series, the massive blue whale takes center stage as the collection moves from land to sea. Now, 2020 1 oz Silver Congo Whale Coins are available to you for purchase online at Silver.com.

While this release in the series is known as the Silver Congo Whale, the term whale is a broad one that refers to a widely distributed, diverse group of marine mammals. For centuries, humanity viewed whales as fish before gaining the scientific insight to reclassify the animals as mammals.

In fact, the term whale refers to an order within Cetacea that excludes dolphins and porpoises. The closest living mammal to whales is actually the hippopotamus, with the two species diverging from one another roughly 40 million years ago. Whales can range in size from a length of just 8.5 feet and a weight of 298 pounds up to a length of 98 feet and a weight of 210 short tons, or roughly 400,000 pounds.

The obverse design of 2020 1 oz Silver Congo Whale Coins depicts the national coat of arms for the Democratic Republic of Congo. The national seal features a leopard’s head in front-facing relief with its powerful teeth exposed. The leopard head is flanked immediately by an elephant tusk on the left and a spear on the right. Below this, there is a banner that sweeps along a rock base that bears the national motto for the country.

On the reverse field of the 2020 Silver Congo Whale Coin is an image of a whale emerging from beneath the waves. The whale shown here is a blue whale, the largest animal on the planet today. Blue whales consist of several subspecies, with the Antarctic blue whale being the largest among them. In keeping with a wildlife theme, the maximum weight of roughly 400,000 pounds a blue whale can reach is equivalent to roughly 33 African bush elephants.

These 2020 1 oz Silver Congo Whales are available to you with individual plastic capsules housing the coins. All coins listed here are in Brilliant Uncirculated condition.

Silver.com customer service can answer your questions when buying silver on the phone at 888-989-7223. Alternatively, you can connect with us online through our live chat and email address features.