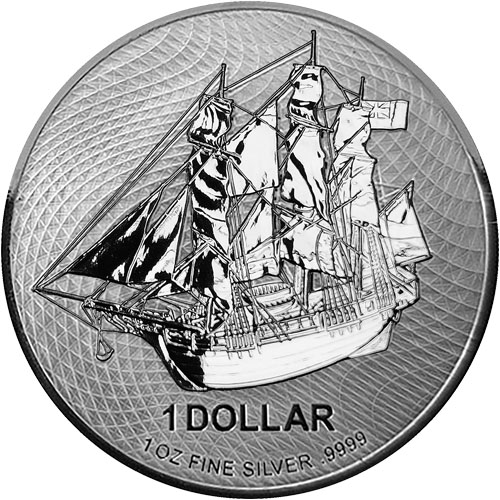 Located in the South Pacific Ocean, the Cook Islands were transited by the crew of the HMS Bounty on its maiden voyage in the Royal Navy. Unfortunately, the simple botanical mission the ship had been sent on ended in mutiny as the crew overtook the ship in the Pacific Ocean and eventually burned down the ship off of the Pitcairn Islands. Now, 2020 1 oz Silver Cook Islands Bounty Coins are available to you for purchase online at Silver.com.

The HMS Bounty was originally built as a small merchant vessel in 1784. The ship was built at the Blaydes shipyard in Hull, Yorkshire, England. The ship was not originally designed for battle as it was just 215 tons, but with three masts and full rigging, the Bethia (as it was originally known) was ideal for ocean voyages. In May 1787, the Royal Navy purchased the ship.

On May 23, 1787, the Bethia was purchased by the Royal Navy for 1,950 Pound sterling and retrofitted for naval service. Renamed the HMS Bounty, the ship was equipped by the Royal Navy with four 4-pound cannons and ten swivel guns. The ship was put under the command of William Blight and set out to the South Pacific to acquire breadfruit plants on a botanical mission.

Queen Elizabeth II is shown on the obverse of 2020 1 oz Silver Cook Islands Bounty Coin. This right-profile bust of the Queen shows Her Majesty with the Girls of Great Britain and Ireland Tiara on her head. This is rumored to be the Queen’s favorite tiara and is shown in depictions of her on countless different denominations of British currency. The image was created in 1998 by Ian Rank-Broadley for the Royal Mint of England.

The HMS Bounty sails the oceans in the design on the reverse side of the 2020 Silver Cook Islands Bounty Coin with its port side visible in this design. The HMS Bounty departed Spithead in Hampshire, England, on December 23, 1787, destined for Tahiti. The ship set out west to approach Tahiti around Cape Horn at the southern tip of South America, but inclement weather forced Bligh to turn east and head for Tahiti by rounding the southern tip of Africa instead, sailing on through the Indian Ocean and reaching Tahiti in October 1788 after 10 months at sea.

Silver.com customer service is available to answer questions about buying silver at 888-989-7223. Alternatively, you can chat with us live online or send us an email.