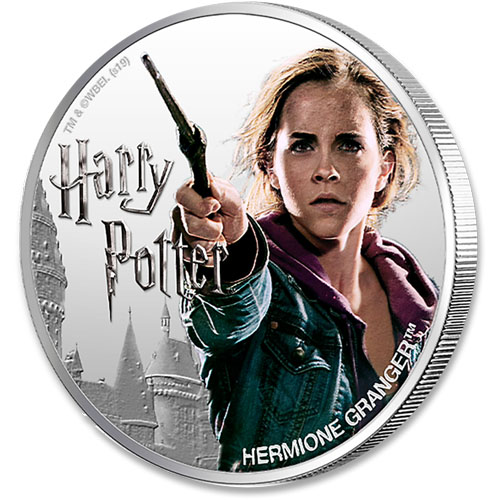 One of the most popular female characters in 21st-century feature films was Emma Watson’s Hermione Granger from the Harry Potter franchise. Watson portrayed the leading female protagonist in the film series across all eight entries and was voted the best female film character of all-time in a poll of Hollywood professionals conducted in 2016. Today, 2020 1 oz Silver Fiji Harry Potter Series Hermione Granger Coins are available to you online at Silver.com.

Hermione is first introduced to readers and viewers in the Harry Potter franchise in the opening pages and minutes as Ron and Harry catch the Hogwarts Express to the Hogwarts School of Witchcraft and Wizardry. Although the boys don’t hit it off with her right away, the trio becomes best friends after the boys help save Hermione from a mountain troll that got into the girls’ restroom in the school.

All of the 2020 1 oz Silver Fiji Harry Potter Series Hermione Granger Coins in this listing come to you with a display box and outer presentation case that includes colorized artwork of the Hermione Granger character from the feature film franchise. Each coin also comes with an individual Certificate of Authenticity.

The certificates available in this series are stunning and include 2 Grams of .999 fine silver content. The certification not only has the unique serial number, weight, purity, and metal content for each coin, but also the backstory on the character featured in the reverse design elements.

Fiji’s coat of arms is depicted on the obverse side of each 2020 Silver Fiji Harry Potter Series Hermione Granger Coin. The national crest of Fiji includes a quartered shield topped by a Polynesian canoe and supported on either side by indigenous Fijians. The coin’s weight, purity, metal content, face value, nation of issue, and date mark are all found on this face.

Emma Watson is captured in a colorized portrait as Hermione Granger on the reverse of 2020 1 oz Silver Fiji Harry Potter Series Hermione Granger Coins. Each release in this series features the actor or actress who portrayed the character depicted in colorized proof with a different view of the castle at Hogwarts in the background.

Please don’t hesitate to reach out to Silver.com with any questions as you buy silver. You can call us on the phone at 888-989-7223, chat with us live online, or simply send us an email.