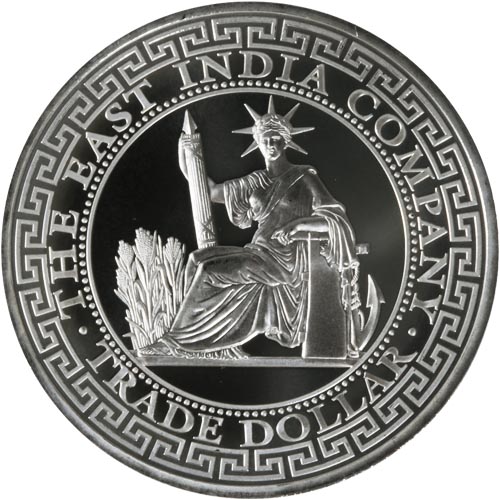 France had an extensive colonial presence throughout the Asia-Pacific region in the 19th century and its colonies required a stable monetary system, especially following the opening of Chinese ports to trade and the influx of international trade that came to the region. The French response came in 1885 with the release of the Piastre de commerce, the French Trade Dollar coin design. Right now, 2020 1 oz Silver French Trade Dollar Coins are available to purchase online at Silver.com.

Each 2020 1 oz Silver French Trade Dollar Coin available to you in this product listing is offered in Brilliant Uncirculated condition. The coins in this series ship individually inside of protective plastic flips and feature one common design element across all five issues. That element is the oriental-themed border design that appears on both the obverse and reverse faces of the coin.

French Indochina was the name given to a collection of French colonies in what is now known as Southeast Asia. In order to stabilize the monetary supply in the region in the late-19th century, France introduced a silver Trade Dollar. The design on the coin is known as Piastre de commerce and reflects imagery that is no doubt familiar to an American audience.

The obverse face of the 2020 1 oz Silver French Trade Dollar Coin comes with the image of Queen Elizabeth II. Her Majesty has featured on British and Commonwealth coinage since her ascension to the throne in 1952. This particular design is the fourth-generation effigy from the Royal Mint and was created by Ian Rank-Broadley. This design depicts the Queen in right-profile relief and was in use on British coins from 1998 to 2015.

On the reverse side of 2020 1 oz Silver French Trade Dollar Coins is the Piastre de commerce. The image of the seated female personification is reminiscent of the Seated Liberty American coin design and she wears a crown made of rays of sunshine similar to that of the Statue of Liberty. The female figure rests her right hand on wheat stalks while resting her left arm on an anchor.

If you have any questions about buying silver, please feel free to reach out to Silver.com. Our customer service team is available to you at 888-989-7223, online using our live chat, and via our email address.