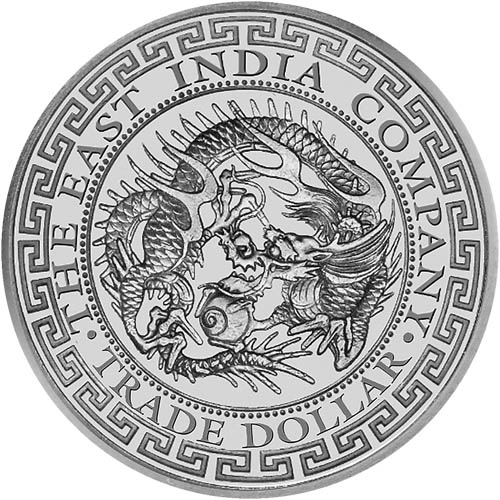 Trade dollar coins are no longer issued in the era of globalized markets and monetary exchanges, but in a time before the value of one currency against another was monitored and well-known, trade dollars were popular. The new Trade Dollar Series from St. Helena revives this brilliant concept in silver coins for sale as bullion specimens. Today, 2020 1 oz Silver Japanese Trade Dollar Coins are available to you online at Silver.com.

Trade dollars were a popular form of global currency that relied more on silver content that assigned values to fiat currency. The popularity of trade dollars in the 19th century arose from Britain’s successful Opium Wars in China that forced open Chinese ports to outside trade. Nations, including China, issued silver trade dollars to better facilitate trade throughout the Asia-Pacific Region.

All 2020 1 oz Silver Japanese Trade Dollar Coins in this listing are available in Brilliant Uncirculated condition. The coins are packaged individually inside of protective plastic capsules and are also available in bulk with tubes of 18 coins.

The reverse of 2020 Silver Japanese Trade Dollar Coins comes with the image of a stylized dragon. This Japanese work of art is the same design that appeared on the actual Japanese trade dollar issued between 1875 and 1877.

Japan issued the silver trade dollars for a short period of time with an estimated 2,736,000 coins produced during this three-year stretch. The vast majority of those coins were produced in late 1876 and 1877.

On the obverse side of 2020 1 oz Silver Japanese Trade Dollar Coins is a depiction of Queen Elizabeth II. Her Majesty features here in the fifth-generation effigy for the Royal Mint of England that was created in 2015 by Jody Clark. It depicts the Queen at the age of 89 wearing the George IV State Diadem crown commissioned in the early 19th century for the monarch. Both sides of the coin have an oriental border design.

Please feel free to reach out to Silver.com if you have any questions about these silver coins. You can call us on the phone at 888-989-7223, chat with us live online, or simply send us an email with your inquiries.