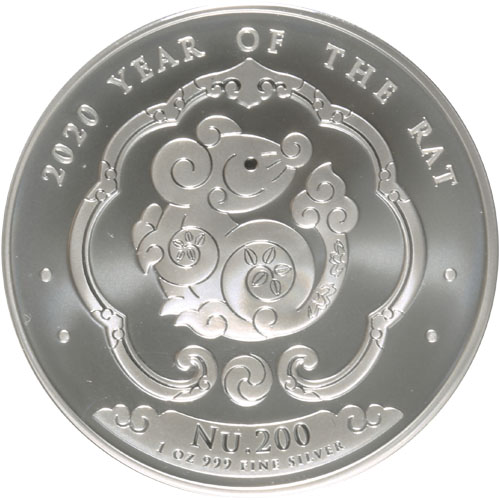 Some of the most beautiful silver coins for sale in the world today come from the smallest of nations. The Kingdom of Bhutan is just the 133rd ranked nation in the world by land area, but it has a prominent series of gold and silver coins celebrating the animals of the Zodiac. The Bhutan Lunar and Attractions Series offers 1 oz silver and gold bullion coins along with proof options. Today, 2020 1 oz Silver Kingdom of Bhutan Lunar Rats are available to you online at Silver.com.

The Kingdom of Bhutan is widely regarded as one of the happiest nations in the world. Its absolute monarch was removed in 2008 in favor of a constitutional monarchy with a bicameral parliament that represents a new Bhutanese democracy. The nation has maintained its independence throughout its history and was never conquered and colonized like many of its East and South Asian neighbors.

All 2020 1 oz Silver Kingdom of Bhutan Lunar Rats in this listing are available to you with a protective plastic flip. The coins are all in Brilliant Uncirculated condition. This coin is the fifth issue in the Bhutan Lunar and Attraction Series and each design comes from the Singapore Mint.

The obverse of 2020 1 oz Silver Kingdom of Bhutan Lunar Rats features the image of a stylized rat. This small little creature is depicted with swirling clouds to form its tail, legs, and even the ears on its head. Within the design of its body are numerous flower petals. The rat is depicted in a seated position with its head looking back at its curled tail.

On the reverse face of 2020 Silver Kingdom of Bhutan Lunar Rats is the national emblem of the Kingdom of Bhutan. Bhutan is ranked first among all nations in Eastern and Southern Asia for its economic freedom, ease of doing business, peace, and level of corruption.

Bhutan Lunar and Attraction Series coins are available in silver bullion, gold bullion, and proof silver options from the Singapore Mint. Founded in 1968, the mint handles circulation coin production for the nation and works with other small nations in the region on coining needs.

Please feel free to reach out to Silver.com if you have questions about these silver coins. We are available to you at 888-989-7223, online using our live chat, and via our email address.

Mint: Singapore Mint for the Kingdom of Bhutan