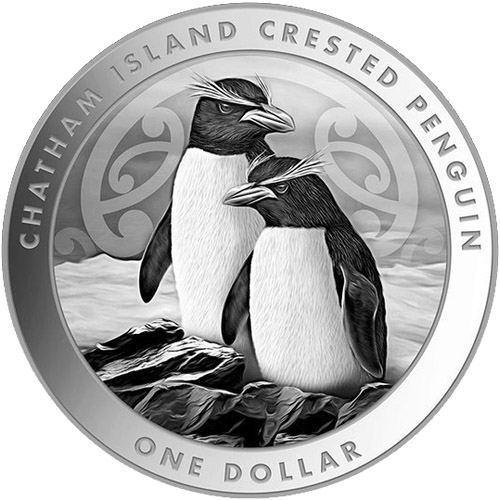 There’s a new silver coin for sale from the New Zealand Mint and it is the first silver bullion coin for New Zealand ever issued by the mint. With a face value in New Zealand dollars (NZD) and the image of an extinct species that was once endemic to Chatham Island, a territory of New Zealand. Right now, 2020 1 oz Silver New Zealand Chatham Island Crested Penguins are available to purchase online at Silver.com.

Each 2020 1 oz Silver New Zealand Chatham Island Crested Penguin Coin available in this listing are packaged individually with protective plastic capsules. Multiples are housed inside of rolls of 20 coins or boxes of 100 coins that include coins packaged in rolls. All coins are in Brilliant Uncirculated condition.

Chatham Island Crested Penguins are an extinct member of the crested penguin species that was endemic to Chatham Island off the coast of New Zealand. The Polynesians who settled the archipelago of 10 islands around 1500 AD were of Moriori tribes and are believed to have hunted the species to extinction. This particular species of crested penguins was first noted in the subfossil deposits in 1994 and formally described recently in 2019.

On the obverse of 2020 1 oz Silver New Zealand Chatham Island Crested Penguins is a depiction of Queen Elizabeth II. The bust of the Queen shown here is from Ian Rank-Broadley and was created in 1998 for the Royal Mint of England as the fourth-generation design for British coins. The design remains in use on New Zealand, Niuean, and Cook Islands coins.

The reverse of the 2020 Silver New Zealand Chatham Island Crested Penguins features two members of the species. The Chatham Island Crested Penguin is shown with two of the birds on a rocky slab of land and is believed to be derived from the erect-crested penguin from the Antipodes Islands. Separation of the two species is believed to have occurred somewhere between 2.5 million years ago and 1.1 million years ago.

If you have any questions, Silver.com is here to help. You can contact us on the phone at 888-989-7223, chat with us live online, or email us directly.