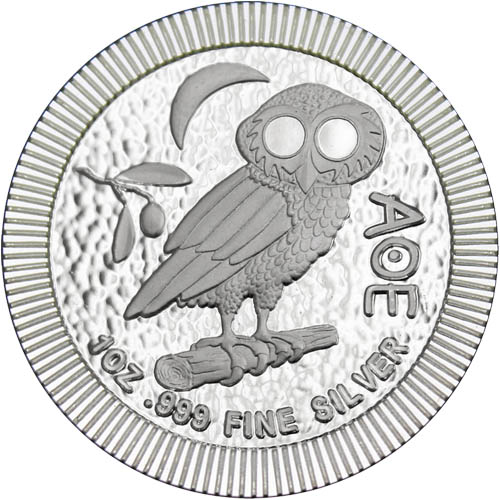 The Athenian Owl Tetradrachm coin was issued in Ancient Greece with a face value equivalent to four drachmae and was widely produced between 510 BC and 38 BC. Those coins replaced the ancient heraldic didrachms and debuted a right-profile portrait of Athena on one side with the owl often associated with the Greek goddess of wisdom, handicraft, and warfare. Right now, 2020 1 oz Silver Niue Athena Owl Stackable Coins are available to purchase online at Silver.com.

Each 2020 1 oz Silver Niue Athena Owl Stackable Coin is available to purchase online today in Brilliant Uncirculated condition. These coins are available individually with a protective plastic flip. You can also purchase multiples inside of mint tubes of 20 coins or boxes of 500 coins that include a total of 25 tubes of 20 coins.

Athenian Owl Tetradrachm coins were silver coins issued by city-states in Ancient Greece between 510 BC and 38 BC. The coins were primarily issued in the city-state of Athens, but gained wide use over nearly 500 years across the various city-states of the region. Each one of those original coins had the portrait of Athena on one side with an owl on the other. Athena, as the goddess of wisdom, was often associated with the owl, itself a symbol of wisdom and mysticism.

On the obverse face of the 2020 1 oz Silver Niue Athena Owl Stackable Coins is a depiction of Queen Elizabeth II. Niue is a member of the Commonwealth and coins issued on its currency have the 1998 effigy of Queen Elizabeth II on the obverse. This right-profile bust of the Queen shows her with the Girls of Great Britain and Ireland Tiara on her head.

The reverse side of 2020 Silver Niue Athena Owl Stackable Coins bears the design from the original Tetradrachm. This design includes an owl on a tree branch with an olive sprig behind it and a crescent moon above. The inscription of “AOE” is Greek for “AOENAION” and translates to English as “of the Athenians.”

If you have any questions about these 1 oz silver coins, please don’t hesitate to reach out. Silver.com customer service is available to you at 888-989-7223, online using our live chat, and via our email address.