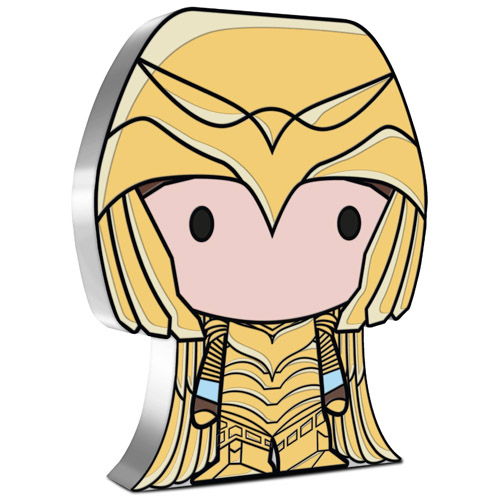 The first major superheroine in American comics, Wonder Woman comes from a race of Amazon women and has been featured throughout the DC Comics universe for 80 years. She is the latest DC Comics figure to appear in a chibi caricature on silver shaped coins from the New Zealand Mint. Now, 2021 1 oz Silver Niue Chibi Wonder Woman 1984 Shaped Coins are available to you for purchase online at Silver.com.

Wonder Woman made her first appearance in a comic book with the October 21, 1941, release of All Star Comics #8. Her first solo feature came just months later with the January 1942 release of Sensation Comics #1. Since the 1940s, the specific Wonder Woman title has been published near-continuously since that time.

The origin story of Wonder Woman first stated that she was sculpted from clay by her mother, Queen Hippolyta, during the Bronze Age. She is said to have been given superhuman powers as a gift from the gods of Greek mythology. This background story was altered in 2011 to reform her history as the daughter of Zeus, the leading Greek god, and Hippolyta.

The obverse of 2021 1 oz Silver Chibi Wonder Woman 1984 Shaped Coins features a bust of Queen Elizabeth II. Her Majesty is shown in right-profile relief wearing the Girls of Great Britain and Ireland Tiara on her head. This design was created for the Royal Mint of England in 1998 by Ian Rank-Broadley.

These 2020 1 oz Silver Niue Chibi Wonder Woman Shaped Coins are available to you in custom cases. The custom case has a molded slot at the center to safely house the coin. The case ships to you a themed Wonder Woman shipper with a viewing window on the front. Each coin has its own Certificate of Authenticity.