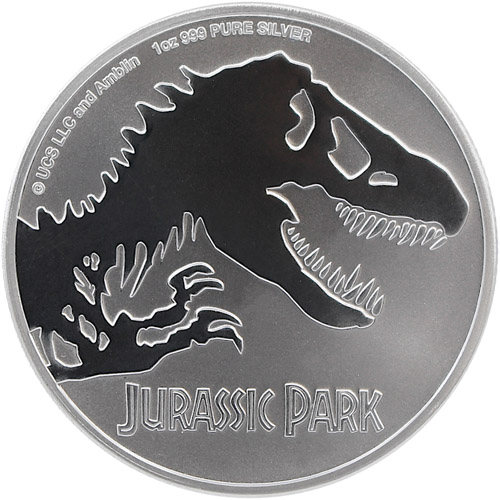 Michael Chrichton’s best-selling novel, Jurassic Park, went on to become the first major blockbuster in theaters around the world. In addition, the film spawned four sequels with a fifth sequel in the works as of 2020. The film’s iconic logo is known to all those who see it and is now featured on a silver coin for sale for the nation of Niue. Right now, 2020 1 oz Silver Niue Jurassic Park Coins are available to purchase online at Silver.com.

The premise of the original Jurassic Park film centers on the establishment of a wildlife park on the fictional island of Isla Nublar. Unlike any other wildlife park on Earth, a wealthy billionaire worked with a team of genetic scientists to extract dinosaur DNA and revive various species of dinosaurs that hadn’t roamed the planet in 65 million years. After industrial sabotage shuts down the power to the park and its security precautions, a group of visitors is left in peril on the island seeking an escape.

Queen Elizabeth II features on the obverse side of 2020 1 oz Silver Niue Jurassic Park Coins. This is the right-profile bust of Her Majesty and was developed in 1998 by Ian Rank-Broadley for the Royal Mint of England as the fourth-generation effigy for British coins. The design includes the Queen’s favorite tiara, the Girls of Great Britain and Ireland Tiara.

The iconic Jurassic Park logo is found on the reverse of the 2020 Silver Niue Jurassic Park Coin. A Tyrannosaurus rex is featured on the reverse field in left-profile relief with its sharp teeth on display and small arms reaching out under its frame. The primary aggressor in the original film, the T-Rex was a natural choice for the logo as one of the best-known dinosaurs from the prehistoric world.

If you have any questions, Silver.com is here to assist. You can call us on the phone at 888-989-7223, chat with us live online, or email us directly.