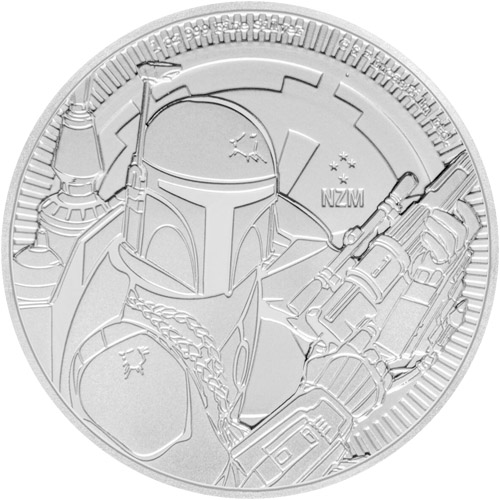 If you’ve been buying silver in the Star Wars Classic Collection at the New Zealand Mint, you have likely been anxiously awaiting the latest release. The second 2020 coin bears an image of Boba Fett on the reverse field. Though he featured minimally in the original trilogy, Boba Fett has become a cult favorite among fans of the series. Today, 2020 1 oz Silver Niue Star Wars Boba Fett Coins are available to you online at Silver.com.

Boba Fett made his debut in the Star Wars franchise in 1978 in the Star Wars Holiday Special, an appearance in which he rescued Luke Skywalker, Chewbacca, C-3PO, and R2-D2 from a monster. Later on, he revealed himself as a bounty hunter working for Darth Vader. His theatrical debut came in 1989 in Star Wars Episode V: The Empire Strikes Back.

All of the 2020 1 oz Silver Niue Star Wars Boba Fett Coins in this product listing are available to purchase with individual plastic flips. Mint packaging is available for multiples of the coin and include either mint tubes of 25 coins or Monster Boxes of 250 coins. The Monster Box has a Star Wars-themed design element on its lid.

On the obverse side of 2020 Silver Niue Star Wars Boba Fett Coins is a depiction of the Queen of England. Her Majesty, Queen Elizabeth II features in right-profile relief with the Girls of Great Britain and Ireland Tiara. This tiara is believed to be the Queen’s favorite and features on her portraits on countless British denominations, both paper notes and coins. The tiara was gifted to her grandmother, Mary of Teck, upon her marriage to the Queen’s grandfather, King George V.

The reverse face of 2020 1 oz Silver Niue Star Wars Boba Fett Coins includes a depiction of the famous bounty hunter with his Mandalorian armor and a rifle as he stands in a battle pose. Fett is famous in the series for having very limited lines in the films and never removing his helmet. In fact, the only glimpse viewers ever get of Boba Fett is in 2002’s Star Wars Episode II: Attack of the Clones when he is seen as a child.

Please contact Silver.com if you have any questions. Our customer service team is available at 888-989-7223, online through our live chat, and via our email address.