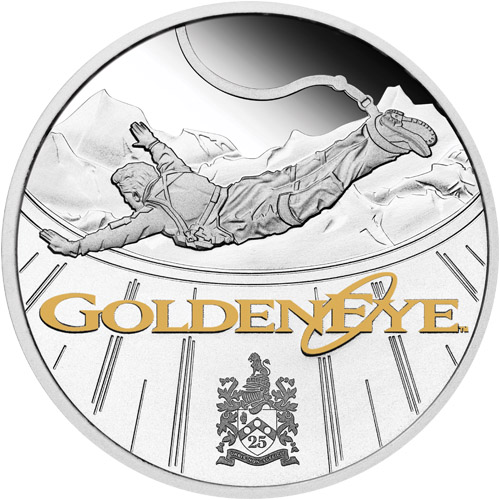 The release of GoldenEye in 1995 marked the 17th feature film in the James Bond franchise and the first after a six-year halt in production that had resulted in the end of Timothy Dalton’s time as Bond. The new GoldenEye 1 oz silver coin from the Perth Mint celebrates the 25th anniversary of the film’s debut. Today, 2020 1 oz Proof Colorized Silver James Bond GoldenEye 25th Anniversary Coins are available to you online at Silver.com.

From 1962 to 1989, the James Bond feature film franchise had never gone longer than two years between releasing new films. The first four films in the franchise were released in consecutive years from 1962 to 1965. From 1967 to 1985, a new film was released every other year with few exceptions. After 1989’s License to Kill starring Timothy Dalton, legal disputes resulted in long delays and saw Dalton resign from the role of Bond, opening the door to Pierce Brosnan.

All 2020 1 oz Proof Colorized Silver James Bond GoldenEye 25th Anniversary Coins are available to you with traditional proof visuals that include frosted design elements and mirrored background fields. The coins are packaged individually inside of black display boxes with a themed shipper for delivery and an included Certificate of Authenticity with your purchase.

On the obverse field of 2020 Proof Colorized Silver James Bond GoldenEye 25th Anniversary Coins, you will find the image of Queen Elizabeth II. Her Majesty is shown here in right-profile relief in a design created in 1998 by Ian Rank-Broadley. The coin includes inscriptions of Her Majesty’s name, the nation of issue, the face value, the date of issue, and the weight, metal content, and purity of the coins.

The reverse face of the 2020 1 oz Proof Colorized Silver James Bond GoldenEye 25th Anniversary Coins includes a depiction of Brosnan’s James Bond bungee jumping. The design comes from the opening scenes of the film as Bond bungee jumps from a dam. The design element includes the name of the film with gold colorization. At the bottom of the design element is the Bond Family crest with the number “25” and an inscription of “Orbis Non Sufficit,” which translates as “the world is not enough.”

Please feel free to reach out to Silver.com with any questions. Our team is available on the phone at 888-989-7223, online through our live chat, and via our email address.