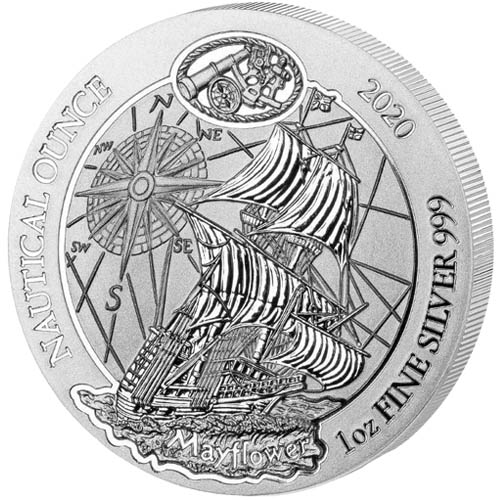 The Nautical Ounce Series for the Republic of Rwanda boasts designs on the obverse honoring some of the most important vessels to sail the seven seas of the world on human voyages. These ships had positive and negative impacts on different human civilizations, but each one noted the advancing knowledge of humanity and its ability to at least attempt to conquer the oceans and expand human contact. The Mayflower played a big role in North American history and now features fourth in the series. Now, 2020 1 oz Silver Rwandan Mayflower Nautical Ounce Coins are available to you for purchase online at Silver.com.

The Mayflower lived an interesting life of voyages long before it ferried the Puritans across the Atlantic Ocean. The name Mayflower was popular in ship naming in England during the reign of King James I between 1603 and 1625, with 26 vessels assigned the name in the Port Books of England during this period.

As for the Mayflower that Captain Christopher Jones took across the Atlantic Ocean with the Puritans, it is believed to have been built in Harwich, Essex, England in 1609, the same place Jones was born in 1570. Jones is listed as the Captain and partial owner as of 1609. The ship’s maiden voyage was a chartered trip from London to Trondheim in Norway. Some 11 years later, the Mayflower would make its way into the history books with its Atlantic voyage.

The obverse side of 2020 1 oz Silver Rwandan Mayflower Nautical Ounce Coins includes a depiction of the Mayflower sailing the ocean. The Mayflower’s voyage from Plymouth, England, to what is now known as Plymouth, Massachusetts, was completed in just over two months from early September 1620 to early November 1620.

On the reverse face of 2020 Silver Rwandan Mayflower Nautical Ounce coins, you will find the national coat of arms for Rwanda. The nation’s official seal is set in the center with inscriptions in the native tongue, Kinyarwanda, around the outside edges of the design field.

These 2020 1 oz Silver Rwandan Mayflower Nautical Ounce Coins are offered to you individually within plastic pouches from the mint or in multiples of 10 housed in sealed plastic sheets.

Silver.com customer service is available to field your questions about buying silver at 888-989-7223. Alternatively, we are available online through our live chat and email address features as well.