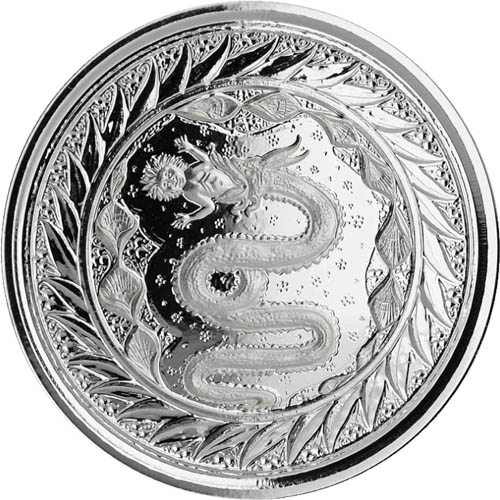 The new Samoa Serpent of Milan coins from the Scottsdale Mint offer a second, exciting design for the small island nation. An independent state since June 1962, Samoa consists of two main islands and four smaller islands around it that was once administered by New Zealand as a trusteeship. Today, 2020 1 oz Silver Samoa Serpent of Milan Coins are available to you online at Silver.com.

The Serpent of Milan is the coat of arms for the House of Visconti. It shows the biscione, a serpent that is rooted linguistically in the Italian feminine “biscia,” which translates into English as “grass snake.” In the design, a snake slithers toward and devours a young child. Ancient texts suggest the child represents a Moor or Ottoman Turk, but that was never proven.

On the obverse side of 2020 Silver Samoa Serpent of Milan Coins is the national coat of arms for the Independent State of Samoa. Many of the Polynesian islands were once colonized by the Spanish, British, and French. Samoa was the first to reestablished its independence in the 20th century when it gained independence on June 1, 1962. With independence came this national emblem with a shield that bears the Southern Cross star constellation in the bottom two thirds and waves and a palm tree in the upper third of the shield.

Please don’t hesitate to reach out to Silver.com with any questions about silver for sale. You can call us on the phone at 888-989-7223, chat with us live online, or email us directly.