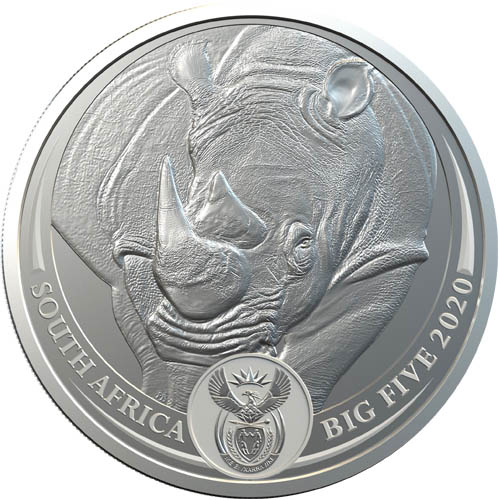 The silver coins for sale in the Big Five Series from the South African Mint feature some of the largest and most deadly creatures native to the African continent. The series launched with the largest terrestrial mammal in the world, the African elephant, and continued with one of the deadliest predators in the world, the African lion. Next up in the series, the unique rhinoceros species is depicted. Today, 2020 1 oz Silver South African Big Five Rhino Coins are available to you online at Silver.com.

There are five extant subspecies of rhinos living in the world today. Two of them are native to the African continent, while the other three are native to Southeast Asia. Both of the subspecies of rhino found on the African continent have two horns on the head, with the front horn larger than the back horn. The Sumatran rhino also has two horns, however, the Indian and Javan rhinos only have a single horn.

All of the 2020 1 oz Silver South African Big Five Rhino Coins are available to purchase individually with each coin in Brilliant Uncirculated condition. The coins are packaged inside of a blisterpack presentation card that encapsulates the coin and offers not only a Certificate of Authenticity, but extra information on the Big Five Series and the rhinoceros species.

On the obverse side of 2020 1 oz Silver South African Big Five Rhino Coin is a depiction of the African rhino with the coat of arms for the Republic of South Africa in the center of the lower design rim. The two rhinos that inhabit the African continent are the white rhino and the black rhino. While the white rhino has a population of roughly 20,400 in the wild, the black rhino is considered endangered and has roughly 4,800 members living in the wild.

The reverse field of 2020 Silver South African Big Five Rhino Coins includes two rhinos standing close together, so close that the two bodies seem to blend into one. The weight, purity, metal content, and face value of the coin are found in the center of this design field.

Please contact Silver.com if you have any questions. We are available to you at 888-989-7223, online using our live chat, and via our email address.