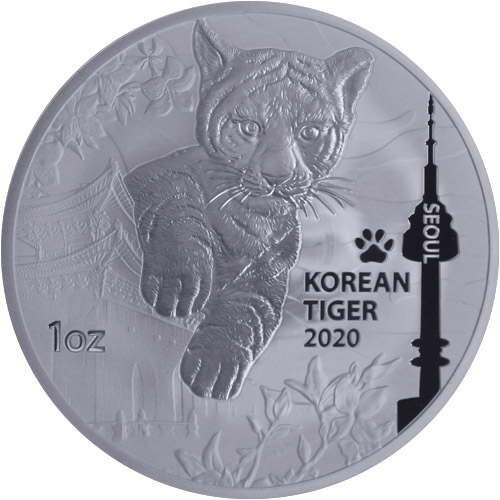 The largest living predatory cat today, the tiger is a symbol of power that is used by many nations in the Eastern World as a national emblem. Among the nations that embrace this powerful cat in its culture and symbolism is the Republic of Korea, better known as simply South Korea. The tiger is at the center of KOMSCO’s annual bullion releases. As of 2018, a silver option is available to investors in the collection. Now, 2020 1 oz Silver South Korean Tiger Medals are available to you for purchase online at Silver.com.

The Korean Tiger Series of bullion medals from KOMSCO debuted in 2016, the same year KOMSCO made a splash with its Chiwoo Cheonwang Series. The Korean Tiger medals were originally available in 1 oz gold and 1/10 oz gold versions. In 2018, KOMSCO expanded the series to feature 1 oz silver, with subsequent additions of a 10 oz silver medal and proof silver medals.

Previous issues of the Silver Korean Tiger have showcased the power and predatory nature of the adult tiger. The 2018 design featured a massive adult tiger on the prowl in the bush, while the 2019 design put the overwhelming power of the tiger on display as its claws ripped through the design field. The 2020 release has a more docile design that captures the tiger at the start of its lifecycle as a young cub. The 2020 release also has a much higher mintage than the 2019 issue, with an increase of 13,000 medals from 20,000 in 2019 to 33,000 for the 2020 medal.

On the obverse side of 2020 1 oz Silver South Korean Tiger Medals is a depiction of a young tiger cub. The young cub is oversized in the design element as it is shown lounging on the gate to the Gyeongbokgung Palace, with the Namsan Tower in Seoul depicted to the right side of the design field.

The reverse face of 2020 Silver South Korean Tigers features the Korean peninsula. Rather than focusing on the geographic nature or political boundaries of the peninsula, KOMSCO uses a stylized design that creates the shape of the peninsula using the letters of the Korean alphabet, the Hangul.

Silver.com customer service is available to assist you on the phone at 888-989-7223. We are also available online through our live chat and email address features.