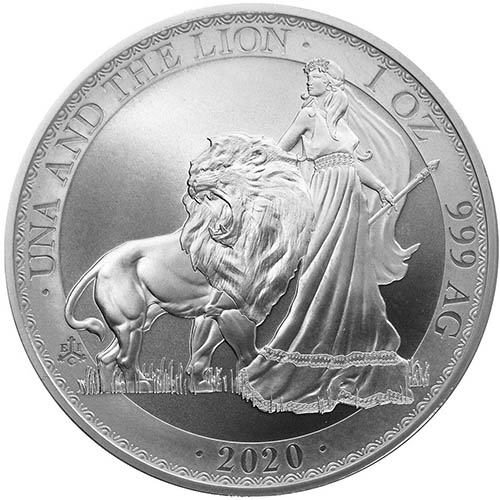 The tail of Una and the Lion was written by a British author in the late-16th century and has played a prominent role in both British culture and coinage in the centuries since. The Fairie Queene was published in 1590 with its first imagery on a British coin coming in 1839 during the reign of Queen Victoria. Now, 2020 1 oz Silver St. Helena Una and the Lion Coins are available to you for purchase online at Silver.com.

Edmund Spencer was the author behind the Fairie Queene. His story has become a symbol of beauty, strength, honor, and endurance in the centuries following its publishing. In the story, Una is a beautiful princess who must face down a terrible dragon in order to get her family and kingdom back. While on her quest to free her family and kingdom, she faces battles, adventure, and romance on her journey.

Along the way, Una encounters a lion that confronts her. Rather than attack her, the lion becomes so enamored with her beauty that it abandons its plans and becomes her protector instead. In the penultimate moment, Una gets the help of a knight in slaying the dragon. That knight was the man who became known as St. George, the patron saint of England.

The obverse of the 2020 1 oz Silver St. Helena Una and the Lion Coins depicts Queen Elizabeth II. In this definitive fifth-generation design, Her Majesty is shown in right-profile relief at the age of 89 wearing the George IV State Diadem Crown. The design was created by Jody Clark in 2015.

Silver.com customer service is now available to assist you on the phone at 888-989-7223. We are also available online through our live chat and email address.