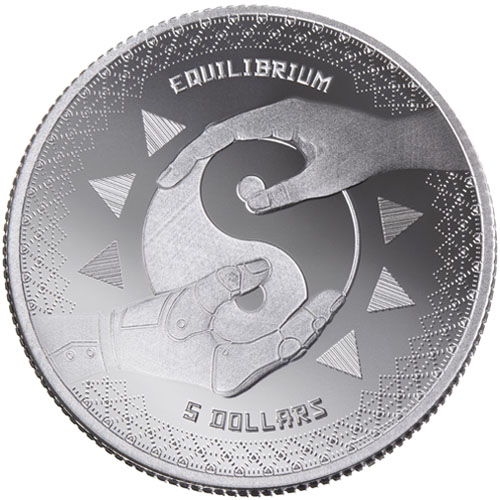 The number of silver coins for sale from Tokelau continues to grow in 2020 with a new series available in the Vivat Humanitas release and the third release of the Equilibrium Series. The Equilibrium Series, like other Tokelau coins from the Pressburg Mint, offer fresh reverse designs with each date mark. Now, 2020 1 oz Silver Tokelau Equilibrium Coins are available to you for purchase online at Silver.com.

In the third release of the Silver Tokelau Equilibrium Series, the Pressburg Mint captures one of the most famous symbols of balance and harmony. The yin-yang symbol is one that originates in Ancient Chinese philosophy. The symbol itself is often reflected as a circle that has two swirling halves: one light and one dark.

At its core, yin-yang symbolism points to the difference between dark and light, negative and positive. However, the symbol is not meant to focus in on the differences between the two elements, but rather, highlight the concept of dualism in which the seemingly opposite forces actually exist in a complementary, interdependent, and interconnected state.

The obverse side of 2020 1 oz Silver Tokelau Equilibrium Coins includes a bust of Queen Elizabeth II. This famous effigy of the Queen was first developed in 1998 by Ian Rank-Broadley for use on British coins from the Royal Mint of England. It was used on British coins from 1998 to 2015, Australian coins from 1999 to 2019, and continues to be used in far-flung reaches of the Commonwealth such as New Zealand, Niue, Tuvalu, and Tokelau.

On the reverse face of the 2020 Silver Tokelau Equilibrium Coins is a depiction of the yin-yang symbol. The symbol that famously represents harmony is clutched by two human hands, one above and one below. The design shows one hand with darker shading than the other, matching the dark-light contrast of the yin-yang and includes stylized triangles as sun rays around the element.

Silver.com customer service is available to assist you on the phone at 888-989-7223. Our team is also available to you on the web using our live chat and email address features.