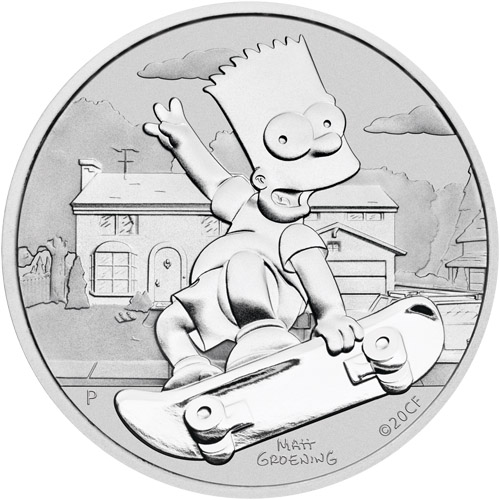 In 2019, the Perth Mint introduced a variety of silver coins aimed at collectors and investors to mark 30 years on TV for the animated family from Springfield. The silver for sale features officially licensed images of The Simpsons and boasts both a colorized option and separate silver bullion coins for investors. Right now, 2020 1 oz Silver Tuvalu The Simpsons Bart Coins are available to purchase online at Silver.com.

Each 2020 1 oz Silver Tuvalu The Simpsons Bart Coins in this product listing comes with an individual protective plastic capsule. The coins available here are from the same release program as the Krusty the Clown issue. There are no colorized visuals and a higher mintage cap. All coins are in Brilliant Uncirculated condition.

Bart Simpson is a troublemaker that millions of American children, and others around the globe, can connect with. When the show was originally a 30-second short on the Tracey Ullman Show, Bart was the breakout character that fans of the animated shorts enjoyed the most. Though he remained a prominent part of every episode, following the launch of the 30-minute series in 1989, The Simpsons refocused on the entire family.

The obverse side of 2020 1 oz Silver Tuvalu The Simpsons Bart Coins comes with an effigy of Queen Elizabeth II. Designed in 1998 by Ian Rank-Broadley, this bust of the Queen was the fourth-generation portrait for British coins and remains in use on Commonwealth coins in the South Pacific to this day.

On the reverse face of the 2020 Silver Tuvalu The Simpsons Bart Coins is an image of the family troublemaker. Bart is shown on this face of the coin riding his skateboard in front of the family home in a scene reminiscent of the opening sequence of each episode of The Simpsons. Bart Simpson has received incredible attention and prominence for a fictional animated cartoon character. Time named him as one of the 100 most important people of the 20th century and he was also noted as “Entertainer of the Year” in 1990 by Entertainment Weekly.

If you have any questions about these coins, please feel free to reach out Silver.com. Our customer service team is available to help on the phone at 888-989-7223, on the web through our live chat, and via our email address.