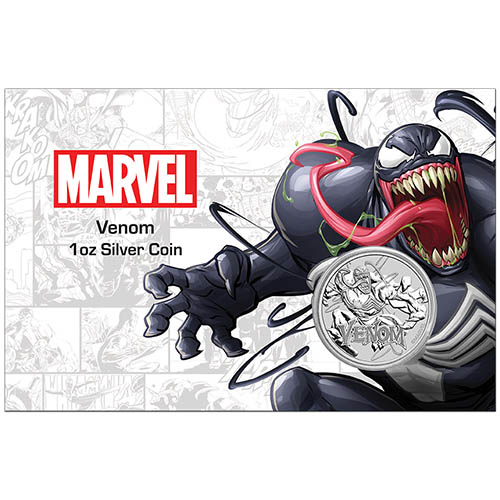 After a successful six-coin release between 2017 and 2019, the Perth Mint expanded its silver for sale in the Marvel Series to include additional coins. The most recent release of the series is the 2020-dated Venom Marvel Coin, bringing an evil character into the designs of this particular series for the first time after originally focusing on heroes and anti-heroes. Now, the 2020 1 oz Silver Tuvalu Venom Marvel Series Coin is available to you for purchase online at Silver.com with a distinctive presentation card.

The Marvel Series silver coins were introduced by the Perth Mint in 2017. The lead-off design of the series was that of Spiderman. Each superhero or anti-hero featured in the collection to this point debuted from the Perth Mint around the time another feature film from the Marvel Cinematic Universe was hitting theaters.

When the coins were originally produced and released by the mint, the packaging options consisted of capsules, rolls, or boxes. From that original 50,000-coin mintage though, the Perth Mint also offers a low number of coins with a white presentation card. One side of that card features colorized artwork to match the design on the reverse of the Marvel character. The other side of the card has the full background story on that character for Marvel enthusiasts.

The obverse side of 2020 1 oz Silver Tuvalu Venom Marvel Series Coins bears the right-profile bust of Queen Elizabeth II. Designed in 1998 by Ian Rank-Broadley, this effigy of the Queen first appeared on British coins in 1998 and was used until 2015. It featured on Australian coins from 1999 to 2018, and debuted that same year on Commonwealth coins and is still in use today.

On the reverse face of 2020 Silver Tuvalu Venom Marvel Series Coins is an image of Venom. This fictional character is referred to as an alien symbiote capable of surviving by merging with a host body. The most famous Venom host was Eddie Brock, the individual who went on to become the nemesis of Spiderman.

These 2020 1 oz Silver Tuvalu Venom Marvel Series Coins are available to purchase today in Brilliant Uncirculated condition and are sealed inside of a presentation card. The presentation card features colorized artwork of Venom on one face and the background story of Venom and his host, Eddie Brock, on the other side.

Silver.com encourages you to contact us with questions at 888-989-7223. You can also chat with us live online or simply send us an email.