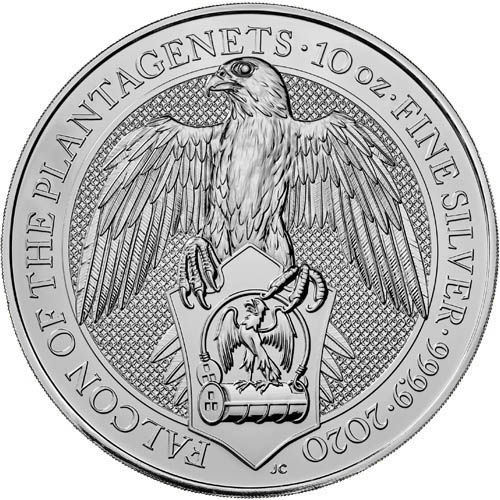 The Falcon of the Plantagenets marks the sixth design release in the bullion Queen’s Beast Series of gold and silver coins for sale. The collection launched in 2016 and has featured some of the most historically important heraldic beasts from the royal arms of England. Today, 2020 10 oz Silver British Queen’s Beast Falcon of the Plantagenets Coins are available to you online at Silver.com.

The House of Plantagenet ruled over England for more than 330 years from the mid-12th century until the late 15th century. The Plantagenets produced 14 kings who sat on the throne of England and six of those individuals came from the Plantagenet cadet houses in England: House of York and House of Lancaster.

All 2020 10 oz Silver British Queen’s Beast Falcon of the Plantagenets Coins in this listing are in Brilliant Uncirculated condition. The coins in this listing are available to you with individual protective capsules and join the other gold and silver coins of the issue. The first 10 oz silver coins for each design debuted in 2017 and were accompanied by the addition of 1 oz platinum coins.

On the obverse of 2020 10 oz Silver British Queen’s Beast Falcon Coins is the effigy of Queen Elizabeth II. This right-profile portrait was created in 2015 by Jody Clark for the Royal Mint and serves as the fifth-generation depiction of Her Majesty since her ascension to the throne in 1952. In this design, the Queen wears the Royal Diadem crown, a ceremonial crown not worn with great frequency.

The reverse side of 2020 Silver British Queen’s Beast Falcon Coins features the design based upon the personal seal of King Edward III. The king was a fan of hawking and chose the white falcon as his personal symbol. It was used by many of his sons, as well as his great-great-grandson King Edward IV. The White Falcon is depicted twice in the design. There is a large falcon supporting a heraldic shield, upon which there is a second falcon clutching an open fetterlock.