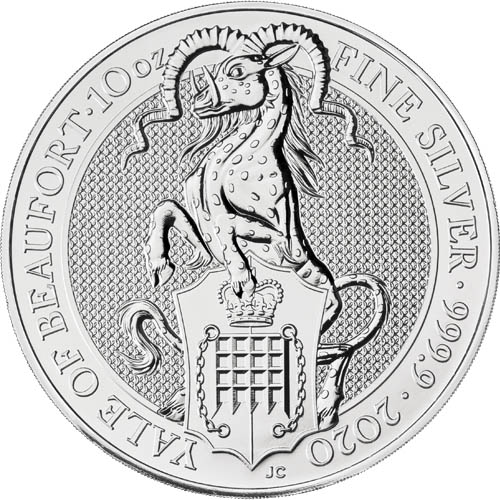 The Queen’s Beast Series is a 10-coin collection from the Royal Mint of England. Introduced in 2016 with the Lion of England design, it features one issue in 2016, two issues each in 2017, 2018, 2019, and 2020, with one final design released in 2021 to round out the collection. While this release schedule applies to the 1 oz gold, 1/4 oz gold, and 2 oz silver bullion coins, a different schedule awaits the 1 oz platinum and 10 oz silver coins.

As the latter two coins were introduced in 2017 with the Lion of England, the design issues in these two particular weights and metals are offset slightly and will continue beyond 2021 by one date mark in all likelihood. For example, the Yale of Beaufort design appeared on 2019-dated bullion coins in the series, but is just now appearing on 2020 date marks for the 1 oz platinum and 10 oz silver options.

Queen Elizabeth II features on the obverse side of all 2020 10 oz Silver British Queen’s Beast Yales. Her Majesty is shown here in right-profile relief at the age of 89 with the George IV State Diadem Crown on her head. This bust of the Queen was created in 2015 by Jody Clark, who became the youngest artist to ever create a monarch’s effigy for British coinage.

The Yale of Beaufort supports the personal badge of King Henry VII on the reverse of 2020 10 oz Silver British Queen’s Beast Yales. The mythical beast stands on its hind legs behind the shield that boasts a crowned portcullis, the personal badge symbol for the first monarch from the House of Tudor.

These 2020 10 oz Silver British Queen’s Beast Yales are available to purchase with protective capsules for individual coins and boxes of 15 for multiples. Each coin is available in Brilliant Uncirculated condition.

Silver.com customer service is available to answer your questions on the phone at 888-989-7223. You can also chat with us live online or email us with your inquiries.