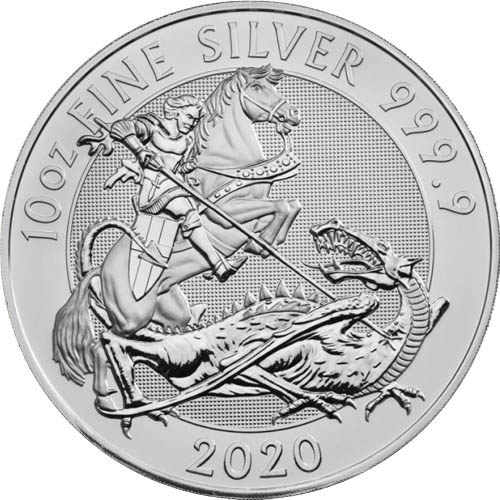 One of the oldest tales of humanity still told to this day is that of St. George and the dragon. Though he died in 303 AD, stories of St. George saving a town and its princess from a fire-breathing dragon were retold as fresh stories as much as 1,000 years after his death. Whether he directly achieved this feat or not, his tale went on to form the backbone of Medieval chivalry and the expectation that all men be brave in the face of evil and potential death. Now, the 2020 10 oz Silver British Valiant Coin is available to you for purchase online at Silver.com.

Although St. George is a Christian patron saint for England and revered by Christians in other corners of the world, the history of his battle with the dragon is believed by many to have its origins before the rise of Christianity around the world. In fact, many even connect the early stories of George, Theodore, and Demetrius, the military saints first recorded achieving the feat, to the Roman Empire.

The iconography often associated with St. George and his military saint brethren seems to have its roots in the Thracian horsemen of the Roman era. The Thracian horsemen used a serpent intertwined with the tree of life and a draco standard later used by the Roman cavalry adopted more of those symbols of men on horseback battling serpents. The first tangible reference of St. George and the dragon together occurs in the early 11th century in images found in Cappadocia in the Byzantine Empire.

On the obverse side of 2020 10 oz Silver British Valiant Coins, you will find the fifth-generation right-profile portrait of Queen Elizabeth II. Designed by Jody Clark, this image first appeared on British coins dated 2016. It shows the Queen at the age of 89 with the George IV State Diadem Crown on her head. The background field has a guilloche design element.

The reverse field of the 2020 Silver British Valiant Coin comes with the image of a youthful, vibrant St. George on horseback as he rides at the dragon to slay it with his spear. In the actual recorded legends, St. George strikes the dragon with his spear, but it doesn’t kill the beast. He later completes the slaying with his sword, not his spear.

These 2020 10 oz Silver British Valiant Coins are available with individual plastic capsules or boxes of 15 coins from the mint. Each one is in Brilliant Uncirculated condition.

Silver.com encourages you to call us with questions about silver for sale at 888-989-7223. We are also available on the web through our live chat and email address features.