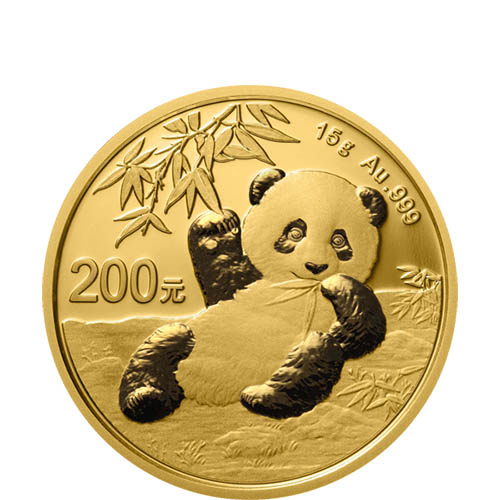 Gold Chinese Pandas are available annually from the Chinese Mint. The popular series debuted in 1982 and first featured four weights before adding a fifth weight in 1983. Unlike many of its counterparts in the gold bullion series, the Gold Pandas have a fresh design on the reverse field with each release of the coin. Right now, 2020 15 Gram Gold Chinese Pandas are available to purchase online at Silver.com.

Each of the 2020 15 Gram Gold Chinese Pandas available in this product listing is in Brilliant Uncirculated condition. The coins listed here are sealed and available to purchase in the original mint packaging to house the coin.

Gold Chinese Pandas have a new image on the reverse field each year. The 2020 design comes from Song Lina who is a native of northeastern China. Her design is just the latest in the series. The only time the Chinese Mint has repeated designs was 2001 and 2002, but the tactic was so poorly received that the mint never did it again.

On the obverse side of 2020 15 Gram Gold Chinese Panda Coins, you will find the outer façade of a building known as the Hall of Prayer for Abundant Harvests. The image depicts a building that is one of several in the larger Temple of Heaven Complex. The complex itself is one of four such religious sites in the city of Beijing and it was designed for those of the Taoist faith.

The reverse face of the 2020 15 Gram Gold Chinese Panda Coins comes with the image of a young Giant Panda cub. The Giant Panda is a unique species of bear that is native to the central highlands of China and subsists on a diet that consists largely of vegetation rather than meat. Up to 99% of the Giant Panda’s diet is bamboo.

If you have any questions about the gold for sale in this series, you can reach out to Silver.com customer service. We are available to you on the phone at 888-989-7223, online through our live web chat, and via our email address.