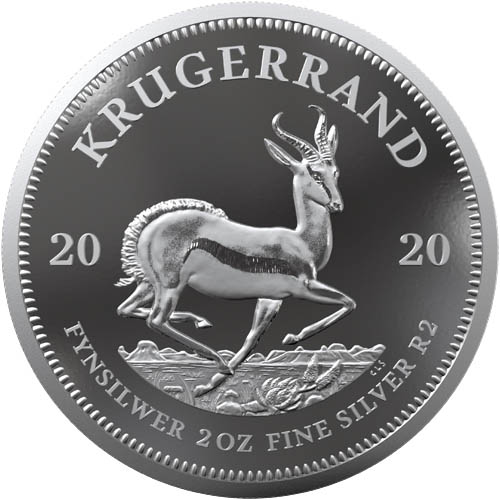 Silver South African Krugerrand coins debuted in 2017 as part of the 50th-anniversary celebration for the Gold Krugerrand coins from the South African Mint. The collection had never featured silver coins before and the mint originally introduced 1 oz silver coins in bullion and proof options. The coins were so popular that the mint has continued to issue each one in the years since. Recently, the silver collection expanded further with a new proof option. Now, 2020 2 oz Proof Silver South African Krugerrand Coins are available to you for purchase online at Silver.com.

All Krugerrand coins are named in honor of the man whose effigy features on the obverse. Paul Kruger was a leading Boer figure during the Boer Wars with Great Britain in the latter half of the 19th century. He eventually participated as one of three men leading the newly independent South Africa in what was known as a triumvirate. In 1883, he ascended to power alone as the elected President of the South African Republic.

On the obverse of 2020 2 oz Proof Silver South African Krugerrands, you will find the left-profile bust of Paul Kruger. Mr. Kruger’s name is the inspiration for these bullion coins. His last name of Kruger was combined with the modern denomination for South African coins, Rand, to create the word Krugerrand.

The reverse of 2020 Proof Silver South African Krugerrands features a depiction of the Springbok antelope. This design was originally created in 1967 by Coert Steynberg and modernized further in 1984 to take on its current feature.

These 2020 2 oz Proof Silver South African Krugerrands are available with an individual capsule around the coin and a black South African Mint presentation box to hold the coin and capsule. Included with your purchase is a Certificate of Authenticity.

Silver.com encourages you to call us with questions at 888-989-7223. We are also available to you online through our live chat and email address features.