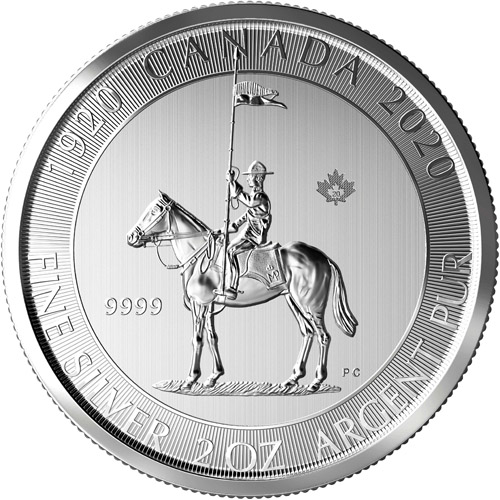 One of the most recognizable police forces in the world today is the Royal Canadian Mounted Police. Equivalent to the Federal Bureau of Investigation in the United States of America, the Mounties are the federal and provincial police force of Canada service across the country in a variety of capacities. Today, 2020 2 oz Silver 100th Anniversary Royal Canadian Mounted Police Coins are available to you online at Silver.com.

The coins in the 2020 2 oz Silver 100th Anniversary Royal Canadian Mounted Police release feature designs dating back to the reign of King George V on the obverse side. The coins have commemorative date marks of 1920 to mark the founding of the RCMP and 2020 to mark the 100th anniversary of the force. Additionally, the coins have the modern radial lines on both sides and the laser-etched maple leaf privy on the reverse.

The Royal Canadian Mounted Police force not only provides federal policing for the nation of Canada, but also offers provincial police enforcement for eight of the 10 provinces in Canada. Additional duties for the RCMP include local policing on a contract basis in the nation’s three territories, 150 municipalities, 600 aboriginal communities, and three different international airports.

On the reverse of 2020 2 oz Silver 100th Anniversary Royal Canadian Mounted Police Coins is the image of a Mountie on horseback. The force is named for its early use of horses to transit between provincial and territorial capital cities. The name persists to this day, though horses are only used in ceremonies at this point in time.

The obverse side of 2020 100th Anniversary Royal Canadian Mounted Police Coins includes an effigy of the ruling monarch of England from the period in which the force was founded. Established in 1920, King George V was the monarch in England at this point in time. He is depicted in left-profile relief in the design on the obverse wearing an ornate crown on his head.

Please don’t hesitate to contact Silver.com with your questions about silver for sale. You can reach out to us online through our live chat and email address features, or call us at 888-989-7223.