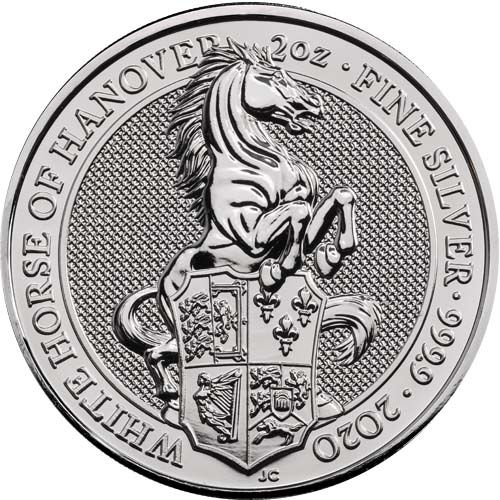 The Queen’s Beast Series offers up its second design in the 2020 date mark with the White Horse of Hanover. With the death of Queen Anne, the crown of England passed to German hands as the Act of Settlement dictated heirs to the throne must be of Protestant faith. In 1714, the first of those Hanoverian monarchs rose to the throne with the coronation of King George I. Today, 2020 2 oz Silver British Queen’s Beast White Horse Coins are available to you online at Silver.com.

King George I was the first of six monarchs to reign over Britain from the House of Hanover. He came to the throne of England as a result of the death of his second cousin Anne, Queen of Great Britain and the Act of Settlement in 1701. That act sought to ensure the crown would remain in Protestant hands and dictated that the crown always passes to the next Protestant in the line of succession. George I would rule from 1714 to 1727.

All of the 2020 2 oz Silver British Queen’s Beast White Horse Coins in this listing come to you with individual protective plastic flips. If you purchase multiples, the coins will arrive in either tubes of 10 coins or Monster Boxes of 200 coins. The box contains a total of 20 individual tubes of 10 coins each.

On the obverse face of 2020 Silver British Queen’s Beast White Horse Coins features the effigy of Queen Elizabeth II. The longest-reigning monarch in English history, she is shown here in the fifth-generation design that captures the Queen at the age of 89 with the George IV State Diadem Crown commissioned in 1820.

The reverse side of 2020 2 oz Silver British Queen’s Beast White Horse Coins includes the White Horse of Hanover supporting the Royal Arms adopted by George I. His Royal Arms pushed the Three Lions of England down to one of the four quadrants on the shield, sharing the upper-left with the Lion of Scotland as a symbol of the unification of the two kingdoms in 1707. The upper-right bears the French fleur de lis, the lower-left the Harp of Ireland, and the lower-right the Arms of Hanover, complete with a white horse.

Please feel free to contact Silver.com with any questions when buying silver. You can call us on the phone at 888-989-7223, chat with us live online, or email us directly.