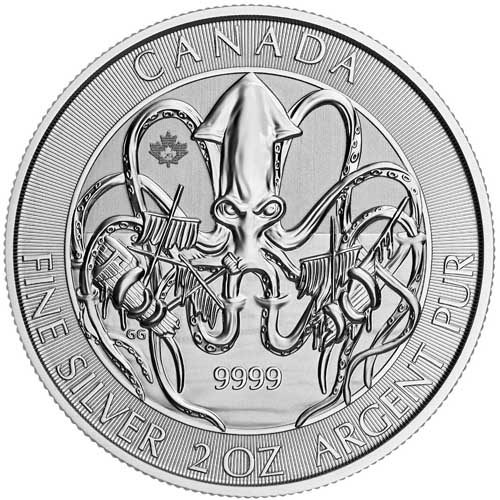 The Royal Canadian Mint offers a new series of silver coins for sale that takes its focus on wildlife to a new dimension. The impressive 2 oz silver specimens in the Creatures of the North Series starts out with a stirring depiction of the mythical Kraken. Featured doing what it does best, wreaking havoc, the Kraken is a distinctive new release for any bullion investor or numismatist. Now, the 2020 2 oz Silver Canadian Kraken Coin is available to you for purchase online at Silver.com.

Humanity’s lack of knowledge and understanding for the world around it in ancient times often lead to the creation of fanciful creatures and deities to explain that which the mind could not reason with. One of the most famous creatures of the ancient world was the Kraken. Though it first originated in Scandinavian mythology in the 13th century as a beast lurking deep beneath the North Sea, its reach became far greater over the next 500 years.

By 1555, the Kraken was a horror story shared by sailors across the European continent and could be found on maps of the globe in such places as New Zealand and South Africa. Sightings of the Kraken around Canada date to the 1700s with most reports placing the beasts in the waters off Newfoundland and Labrador. What was believed as a mythical fear became a real-life nightmare when a squid measuring 55 feet in length washed up on the shores of Glovers Harbor in Newfoundland in 1878.

The obverse face of 2020 2 oz Silver Canadian Kraken Coins features the fourth-generation portrait of Queen Elizabeth II. The first monarch portrait since the 1930s and the reign of King George VI to show the monarch without a crown, this effigy was designed in 2003 by Susanna Blunt for Canadian denominations.

On the reverse side, 2020 2 oz Silver Canadian Kraken Coins bear the image of a massive Kraken emerging from the water to completely destroy a wooden sailing vessel. Its masts snapping and sails in tatters, this ship is doomed for certain as the Kraken uses its long tentacles to snap the ship in half like a toothpick.

These 2020 2 oz Silver Canadian Kraken Coins are available to you today as the first of the Creatures of the North Series. The design was created by Gerald Gloade and the coins are available individually with plastic flips. Multiples of the coin are also available with tubes of 14 coins. Each coin is in Brilliant Uncirculated condition.

Silver.com customer service is available to you at 888-989-7223. We can also field your questions online via our live chat or through our email address.