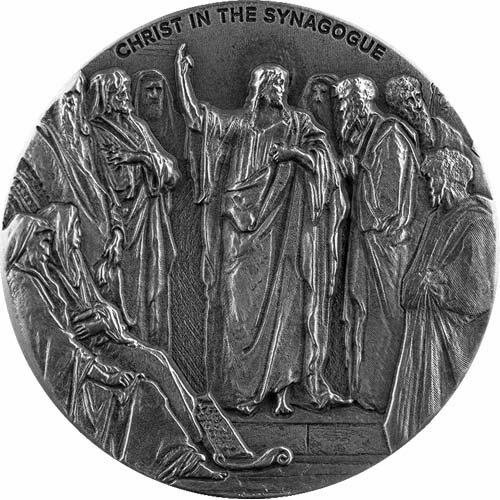 The silver coins for sale catalog the collective Biblical works of Gustave Dore, a French artist, illustrator, and sculptor. Though he is responsible for many different works of art, he is best known for his works of art inspired by the bible. The first was an illustrated Bible he was commissioned to complete for British publishers. The Silver Biblical Series from the Scottsdale Mint dives into Dore’s deepest, greatest Biblical works. Now, 2020 2 oz Silver Christ in the Synagogue Biblical Series Coins are available to you for purchase online at Silver.com.

Dore’s works of art as featured in the Silver Biblical Coin Series come from the aptly named La Grande Bible de Tours. The series includes 241 wood engravings that were eventually published in two volumes at the same time by Mame in Tours, France, and by Cassell & Company in the United Kingdom. The complete works were released in 1866 and featured 139 plates with scenes from the Old Testament, 81 plates with scenes from the New Testament, and 21 plates from the Apocrypha.

The Silver Biblical Series from the Scottsdale Mint has merely scratched the surface of these impressive works, completing its 2020 release schedule with the Christ in the Synagogue design as its 36th overall recreation of Dore’s works. In the more than 150 years since its release, Dore’s works of art have immeasurably influenced visual arts and popular culture around the world.

The obverse of 2020 2 oz Silver Christ in the Synagogue Biblical Series Coins features a bust of Queen Elizabeth II. In this right-profile portrait, the Queen is shown with the George IV State Diadem Crown upon her head. This piece from the official Crown Jewels includes more than 1,300 diamonds in its setting with a total weight in excess of 300 karats.

On the reverse field of 2020 Silver Christ in the Synagogue Biblical Coins is a depiction of Jesus Christ as he teaches in a synagogue in Nazareth. The four major gospels of the Bible reference Jesus’ time teaching in synagogues, with this particular scene coming from the Gospel of Matthew. In that gospel, onlookers and Jewish leaders are deeply offended at Jesus’ teachings and refuse to believe what he is saying.

These 2020 2 oz Silver Christ in the Synagogue Biblical Series Coins are available to purchase with Bible-themed display boxes. Each coin has visual brilliance courtesy of the antique polish applied to the blank and the historic appeal of ancient coinage with the use of a rimless blank. The edge of the blanks has a laser-etched serial number and the included Certificate of Authenticity has a matching serial number.

Silver.com customer service can assist you with questions at 888-989-7223. We are also available to you online through our live chat and email address options.