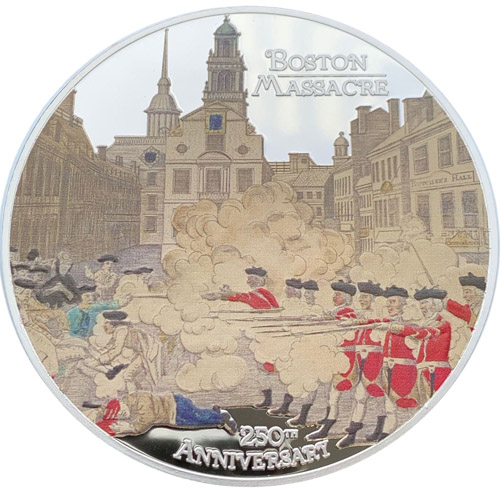 Boston was the leading city in British America in the 18th century. The capital of the Province of Massachusetts Bay and vital shipping center, the city also became the hub for colonial resistance to an increasing number of unpopular taxation acts enacted by British Parliament without a representative of the American colonists it was imposing those taxes onto. Right now, 2020 2 oz Proof Silver American Revolution Boston Massacre Coins are available to you for purchase online at Silver.com.

Each of the 2020 2 oz Proof Silver American Revolution Boston Massacre Coins available in this product listing comes with colorized visuals on the reverse design field. The coins in this series are available inside of clear suspension displays and come with a Certificate of Authenticity.

The first release in the American Revolution Series, the Boston Massacre coin marks the 250th anniversary of the seminal moment. In March 1770, American Colonists protesting against British taxation policies in the city of Boston confronted a British sentry. The situation escalated as British troops under the command of Captain Thomas Preston arrived to support the sentry. As the crowd continued to harass the British, one soldier lost his composure and fired into the crowd. The resulting gunshot lead the other troops to all fire their weapons. In the end, five colonists were killed and eight others wounded.

The obverse images on the 2020 2 oz Proof Silver American Revolution Boston Massacre Coins depict the Liberty Tree. This famed elm tree stood in Boston Common in the 18th century and became a popular gathering place in the city for Americans looking to share sentiments and complain about the rule of the British.

On the reverse face of 2020 2 oz Proof Silver American Revolution Boston Massacre Coins is an image of artwork created by Paul Revere to commemorate the moment the British opened fire on the weaponless colonists. The Old State House is featured in the background of the design as the colonists scattered amidst the gunfire from British troops.

If you have any questions when you buy silver, Silver.com customer service is here to help you out. Our team members are available on the phone at 888-989-7223, online through our live chat, and via our email address.