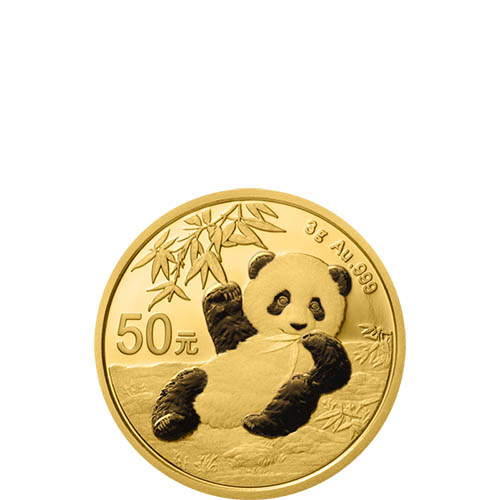 The gold for sale in the Chinese Panda Series includes a total of five different weights. Once issued in Troy ounces, as of 2016 this series is the only leading bullion coin collection in the world that uses Grams for its weight measurements instead of Troy ounces. The former 1/10 oz gold coin is now issued as the 3 Gram Gold Panda. Now, 2020 3 Gram Gold Chinese Panda Coins are available to you for purchase online at Silver.com.

The Gold Chinese Panda Coins were released in 1982 with Troy ounce weights. Over the course of more than three decades, the series underwent a handful of important changes. First, the five coins in the series had each individual face value increased in 2001. Second, and more recent, the series became the first major bullion series to adopt Grams in a shift away from Troy ounces.

With the switch away from Troy ounces, the 3 Gram Gold Chinese Panda replaced the 1/10 oz Gold Chinese Panda. The change in weights wasn’t just a matter of new inscriptions. The weight and diameter of most of the coins had to be adjusted to keep in line with the new weights.

On the obverse side of the 2020 3 Gram Gold Chinese Panda coin is a depiction of the exterior structure of the Hall of Prayer for Abundant Harvests. This building is the central piece and largest structure in the Temple of Heaven Complex. It has featured on the obverse in this series every year.

The reverse of the 2020 Gold Chinese Panda Coin includes a fresh image of the Giant Panda Series each year. The 2020 coins have a design that focuses on a young panda cub pursuing some bamboo leaves. Lying on its back in a field, the cub playfully bats at the leaves with its paws to get something to dine on.

These 2020 3 Gram Gold Chinese Panda Coins are available to you in Brilliant Uncirculated condition. These coins are unsealed products that are housed inside of plastic flips. Each coin is a product of the Chinese Mint, but as the mint does not use mint marks, there is no way of knowing if the Gold Chinese Pandas come from the Beijing, Shenyang, Shenzhen, or Shanghai facilities.

Silver.com customer service is available to you at 888-989-7223. We are also available online using or live chat and email address features.