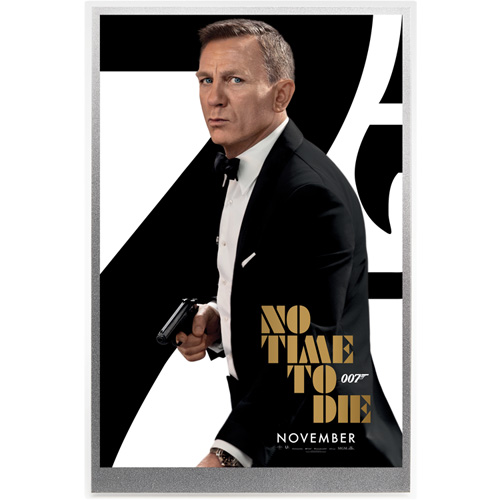 The release of the 25th feature film in the Eon Productions franchise of James Bond films, No Time To Die, has been beset by delays due to the COVID-19 pandemic. Though the feature film has been pushed back from early 2020 to Spring 2021, you can still own the theatrical movie posters that will adorn theaters when the film is finally released. It is part of a broad collection of silver foils with replica images of movie posters from recent James Bond films. Now, 2020 5 Gram Silver Australian James Bond Movie Poster No Time To Die Foils are available to you for purchase online at Silver.com.

From 1962 to 2002, James Bond feature films were adapted directly from authorized James Bond novels and short-story collections. For example, 1962’s Dr. No starring Sean Connery was a film adaptation of British author Ian Fleming’s first James Bond novel. In 2006, the franchise received a reboot that took 007 back to a point in his life where he was training to become a British secret agent.

The 2006 release of Casino Royale was the first film in the franchise in four years and the first with Daniel Craig. An entire generation of young James Bond fans knows no other actor as the skilled secret agent. No Time To Die will be the fifth and final time that Craig will play the role of Bond. This leaves him two appearances shy of both Sean Connery and Roger Moore, both men having played Bond seven times.

For the obverse design of the 2020 5 Gram Silver Australian James Bond Movie Poster No Time To Die Foil, the 007 logo is featured against a clean silver background field. The 007 logo features a gun barrel at the right end of the emblem, with the “7” in the code number forming the handle and butt of the gun.

In the reverse element of 2020 5 Gram Australian James Bond Movie Poster No Time To Die Foils, the Perth Mint offers a full-color replica of the movie poster for the upcoming feature film. In the upcoming release, Bond has left the service of MI6 but nonetheless finds himself wrapped up in a plot to save humanity.

These 2020 5 Gram Silver Australian James Bond Movie Poster No Time To Die Foils are available to you with a presentation box housing a Perspex case. The silver foil is housed in the Perspex case and can be displayed by mounting directly on a wall or within the base of the presentation box. All items ship together in a themed shipper.

Silver.com customer service can answer your questions when buying silver on the phone at 888-989-7223. We are also available online through our live chat and email address features.