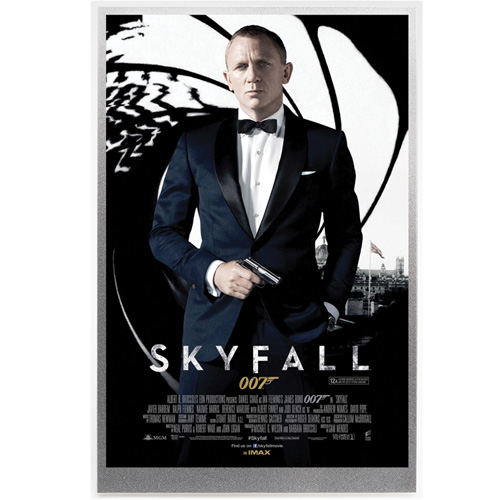 For those buying silver from the Perth Mint, it is well-known that the mint produces some of the most unique silver items out there. Among the newest options from Perth Mint are silver foils with full-color artwork. In the latest release, the Perth Mint captures full-color designs of all the James Bond films in which Daniel Craig played the leading role. Right now, 2020 5 Gram Silver Australian James Bond Movie Poster Skyfall Foils are available to purchase online at Silver.com.

Each 2020 5 Gram Silver Australian James Bond Movie Poster Skyfall Foils available here comes with a Perspex display case. The clear Perspex display securely holds the foil for display on either a wall mount or the base of the black presentation box from the Perth Mint. All of the items ship together inside of a themed shipper.

The release of Skyfall in 2012 coincided with the 50th-anniversary celebration of the franchise’s first release. In 1962, Dr. No was released with Sean Connery playing the leading role as James Bond. Skyfall became the seventh-highest-grossing film of all time when it was released and is the only singular James Bond release to surpass $1 billion at the global box office.

On the obverse side of 2020 5 Gram Silver Australian James Bond Movie Poster Skyfall Foils is the 007 logo. The iconic logo forms a gun with the included stylized barrel at the end, with the “7” forming the handle and butt of the gun.

The reverse field of 2020 5 Gram Silver Skyfall Foils includes an image of the colorized theatrical poster for Skyfall. In the plot of the film, MI6 suffers a direct attack on its headquarters by a former agent that was abandoned on a previous mission. The wider plot of the film sees former agent Raoul Silva try to discredit and kill M as revenge for abandoning him.

Bond rises to the occasion and eventually saves M by bringing her to his childhood home in the Scottish Highlands, Skyfall. The film marked the return of two recurring characters that had been absent in the previous two films: Q and Miss Moneypenny.

If you have any questions about these silver items, Silver.com customer service is here to help you get answers. You can call us on the phone at 888-989-7223, chat with us live online, or email us directly.