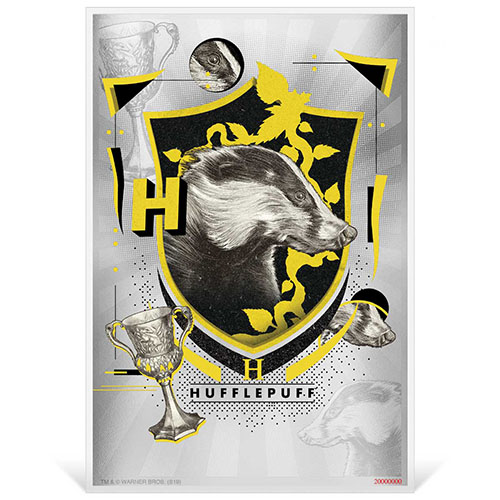 There’s no stopping a popular franchise when it is on a roll, even if it hasn’t produced new media for consumption in several years. Such is the case with Harry Potter. Though the last novel was released long ago and the final feature film in 2011, the popularity of the franchise lives on in new generations discovering its value. Numismatists who enjoyed the series can now own silver products with Harry Potter themes, including a new collection of house banners on silver foils. 2020 5 Gram Silver Niue Hogwarts House Hufflepuff Foils are now available to you for purchase online at Silver.com.

The Hogwarts School for Witchcraft and Wizardry is where all young children with magical backgrounds and family blood go starting at the age of 11. When the first-year students arrive at Hogwarts, the sorting hat determines which house in the school that students will reside in. Among the four houses in the school, Hufflepuff is considered to be the most inclusive and least intense in its rivalries with other houses.

There is an exception to the nature of House Hufflepuff though in the third book and film, Harry Potter and the Goblet of Fire. When Hogwarts hosts the Triwizard Tournament between itself and two other schools, Cedric Diggory is chosen as the Hogwarts representative and is a resident of House Hufflepuff. However, the cup that chooses the students spits out Harry Potter’s name as well, forcing him into the Triwizard Tournament and generating an intense rivalry between Hufflepuff and Gryffindor.

The obverse of the 2020 5 Gram Silver Niue Hogwarts House Hufflepuff Foil comes with a right-profile portrait of Queen Elizabeth II. Her Majesty is shown here in a design created in 1998 by Ian Rank-Broadley.

On the reverse, the 2020 Silver Niue Hogwarts House Hufflepuff Foil features the colors and emblems of Hufflepuff in the house banner. Hufflepuff is associated with the element of Earth and uses the colors yellow and black in its banner. Yellow represents wheat while black represents soil. The house animal, a badger. and the Triwizard Tournament Champions Cup are also included in the design.

These 2020 5 Gram Silver Niue Hogwarts House Hufflepuff Foils are available with acrylic capsules and themed shippers that include colorized artwork of the house banner for Hufflepuff. Each foil is in Brilliant Uncirculated condition.

We encourage Silver.com customers to call us with questions about silver bullion at 888-989-7223. You can also connect with us on the web through our live chat and email.