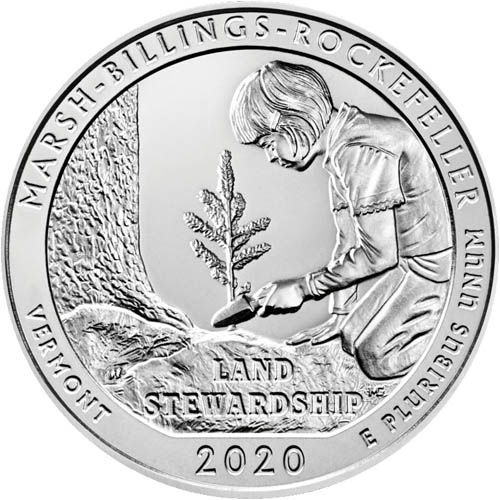 The America the Beautiful Series of silver bullion coins from the United States Mint debuted in 2010. The series of 5 oz silver coins is based on the State Quarters program the US Mint issued starting in the 1990s. The latter coin program put unique designs for each state on the reverse of circulation US quarters. The coins became so popular with collectors that the US Mint decided to issue a dedicated silver bullion series for investors and collectors.

All of the 2020 5 oz ATB Silver Marsh-Billings-Rockefeller National Historical Park Coins available here come with a plastic capsule for individual specimens. Multiples are available with the original US Mint packaging that consists of mint tubes of 10 coins or Monster Boxes of 100 coins housed in 10 tubes of 10 coins. All specimens are in Brilliant Uncirculated condition.

President George Washington is depicted on the obverse of all 2020 5 oz ATB Silver Marsh-Billings-Rockefeller National Historical Park Coins. The first man elected President of the United States of America, Washington previously served as the Commander-in-Chief of the Continental Army and helped guide a young nation politically and militarily through the Revolutionary War before serving two terms as president. This left-profile bust has been on the US quarter since 1932.

A young girl is depicted planting a sapling from the Norway spruce species on the reverse of the 2020 5 oz ATB Silver Marsh-Billings-Rockefeller National Historical Park Coin. the Marsh-Billings-Rockefeller National Historical Park consists of lands originally set aside as a privately-managed forest and dairy farm that was transferred to the control of the US federal government in 1992.

Please don’t hesitate to reach out to Silver.com with any questions you might have about these silver coins for sale. You can connect with us on the phone at 888-989-7223, online through our live chat, and via our email address.