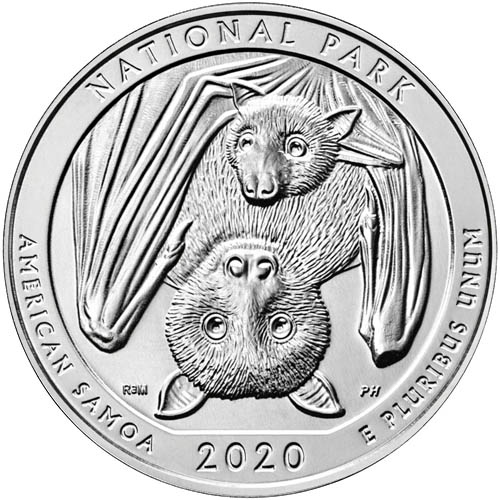 Please note that the 2020 5 oz ATB American Samoa Coins may not fit perfectly in the provided capsules. The US Mint does not provide the protective capsules for ATB bullion coins. The capsules are procured from a third-party after departing the mint. The blanks in the 2020 American Samoa release are wider than previous issues and, as such, the coins may not perfectly fit within the provided capsules.

As the collection of silver for sale in the America the Beautiful Series winds to its conclusion, the last full year of five releases will be 2020. The final year starts with the image of the Samoa flying fox on the reverse of the coins. Today, 2020 5 oz Silver ATB National Park of American Samoa Coins are available to you online at Silver.com.

The National Park of American Samoa is the only National Park Service unit south of the equator and it is spread across three islands in the American Samoa chain: Tutuila, Ofu, and Ta’u. The park was established in 1988 to help preserve coral reefs, rainforests, fruit bats, and Samoan culture. Included within the park are 13,500 acres of space that covers 9,000 acres of land and 4,500 acres of ocean and coral reefs.

All of the 2020 5 oz Silver ATB National Park of American Samoa Coins in this listing ship with protective plastic capsules for individual purchases. When you purchase multiples, the coins will arrive inside of either mint tubes of 10 coins or Monster Boxes of 100 coins. The Monster Box contains a total of 10 individual tubes of 10 coins each. All coins are available in Brilliant Uncirculated condition.

The reverse face of 2020 Silver ATB National Park of American Samoa Coins is a depiction of the Samoa flying fox. A species of bat, the Samoa flying fox is native to three island chains in the South Pacific and inhabits subtropical and tropical dry forests. In this design, you will notice a mother and its pup together.

On the obverse side of all 2020 5 oz Silver ATB National Park of American Samoa Coins is a right-profile portrait of President George Washington. This iconic portrait has been on the obverse of the circulation US quarter since 1932 and was placed there on the 200th anniversary of Washington’s birth. The design was created in 1932 by John Flanagan and inspired by a 1786 bust sculpted of Washington by William Cousins.

Please feel free to contact Silver.com with any questions. We are available on the phone at 888-989-7223, online using our live chat, and through our email address.