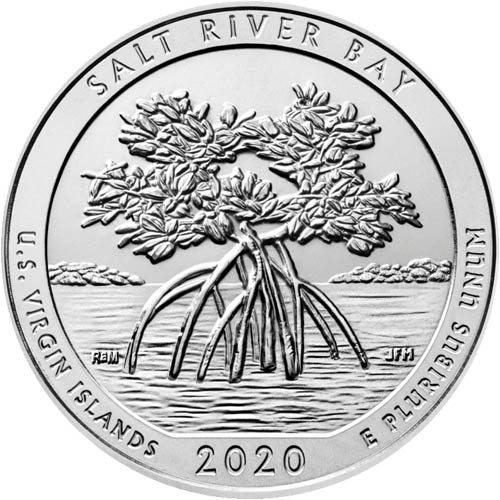 One of two US territories in the Caribbean Sea, the United States Virgin Islands is a small island chain in the Virgin Islands archipelago within the Leeward Islands of the Lesser Antilles. The islands are situated to the east of Puerto Rico, the other US territory in the region, and west of the British Virgin Islands. The USVI is represented 53rd in the America the Beautiful Series as the US Mint winds down this 56-coin collection of silver coins for sale. Now, 2020 5 oz Silver ATB Salt River Bay National Historical Park and Preserve Coins are available to you for purchase online at Silver.com.

In 1917, Denmark sold the islands to the United States in the Treat of the Danish West Indies. This passed control of the three main islands of Saint Croix, Saint John, and Saint Thomas over to America. The current capital of the territory is the city of Charlotte Amalie on the island of St. Thomas.

President George Washington is featured on the obverse side of the 2020 5 oz Silver ATB Salt River Bay National Historical Park and Preserve Coins. This left-profile bust of Washington was created in 1932 by John Flanagan for the US quarter. Washington’s bust was put on the quarter that year to honor the 200th anniversary of his birth.

A young red mangrove tree is depicted on the reverse of all 2020 Silver ATB Salt River Bay National Historical Park and Preserve Coins. The red mangrove grows in estuarine ecosystems such as those preserved by the ecological park at Salt River Bay. An estuarine ecosystem exists only in the tropics and consists of a partially enclosed coastal body of water that is brackish in nature, features one or more rivers flowing into it, and has a free connection to the open sea.

These 2020 5 oz Silver ATB Salt River Bay National Historical Park and Preserve Coins are available to you for purchase online in individual capsules. Multiples of the coin come in mint tubes of 10 coins or Monster Boxes of 100 coins. Each one is in Brilliant Uncirculated condition.

Silver.com customer service is available at 888-989-7223. You can also chat with us live online or simply send us an email.