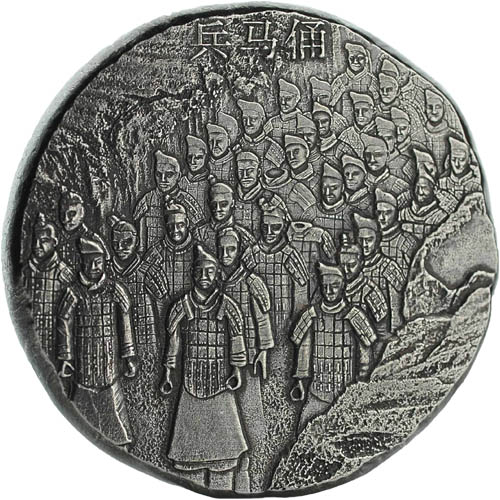 Fiji Terracotta Army Coins are available from the Scottsdale Mint, a private minting facility in the city of Scottsdale, Arizona. The collection of 5 oz silver coins with rough, hammered edges and a thick, chunky blank. The first issue of these 5 oz silver coins featured images of Ancient Egyptian gods, and in 2018 moved on to feature the soldiers of the Terracotta Army.

Discovered beneath a farm field in 1974 in Lintong County, China, the Terracotta Army consists of more than 8,000 foot soldiers, 130 chariots driven by 520 horses, and a total of 150 additional mounted horse cavalry. The army was a form of funerary art intended to symbolize the strength of Emperor Qin Shi Huang, the first Emperor of China. The Terracotta Army was buried with the emperor in his tomb upon his death to accompany him into the afterlife.

The obverse of the 2020 5 oz Silver Fiji Terracotta Army Coins includes a depiction of the national coat of arms for Fiji. The national seal is supported on either side by native Fijian figures. The shield in the coat of arms is quartered by St. Andrew’s cross with sugarcane, a coconut palm, and a banana bundle in three of the four quadrants, with a dove in the remaining quadrant. There is a lion in passant guardant pose, with a Polynesian outrigger canoe above.

On the reverse side of 2020 Silver Fiji Terracotta Army Coins is an image of some of the soldiers from the Terracotta Army. The Terracotta Army went undiscovered for more than 2,000 years beneath the soil in China. The army is believed to have been buried with Emperor Huang in the 3rd century BCE, before it was discovered by farmers in 1974.

These 2020 5 oz Silver Fiji Terracotta Army Coins are available to you with fabric pouches that feature a stamped design and a drawstring enclosure. Each coin has its own pouch and each purchase comes with a Certificate of Authenticity.

Silver.com customer service is available to assist you with any questions about buying silver at 888-989-7223. You can also connect with us live online using our web chat or simply send us an email.