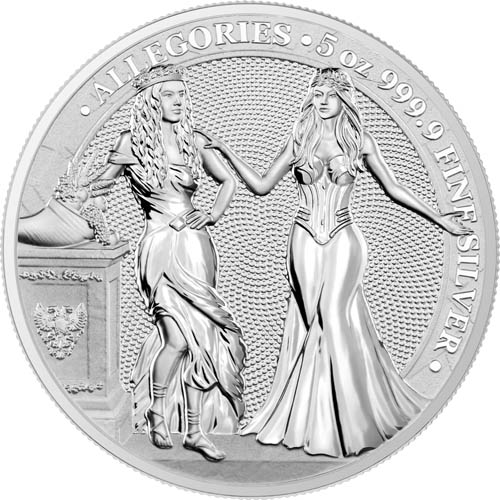 The figure of Italia as it is depicted in the modern world dates to the formation of modern, unified Italy starting around 1797, and later during the period of republican Italy. However, the origins of Italia and some of the symbolism accompanying her figure date back more than 2,000 years to the Roman Empire.

Modern Italia is linked by many to the historic deity of fertility from the Anatolian region. Known as Cybele, her figure was often represented wearing a tall, walled crown. During the Second Punic War against the Carthaginians and Hannibal, Roman priests predicted that Rome could only be saved by Cybele. Her figure was erected in Rome and the Roman Army eventually defeated the army of Hannibal, saving the city in the process.

The obverse design of 2020 5 oz Silver Germania The Allegories Italia & Germania Rounds comes with a modern vision of Italia alongside Germania. Italia is shown with the Horn of Plenty at her side as a symbol of wealth and prosperity, while also wearing the walled crown associated with Cybele.

On the reverse field of 2020 Silver Germania The Allegories Italia & Germania Rounds, you will find the Germania Mint coat of arms. The crowned, quartered shield offers a number of symbols associated with heraldry throughout Europe. These include the double-headed eagle, a symbol that originated with the Roman god Janus, guarding of passageways. The checkered pattern refers to wisdom and prudence. The ribbon with flowers represents a strong, independent nation, and the wild boar represents power and might.

These 2020 5 oz Silver Germania The Allegories Rounds are available to you with a Certificate of Authenticity and an individual acrylic capsule. All of the silver rounds boast .9999 fine silver content and are in brand-new condition.