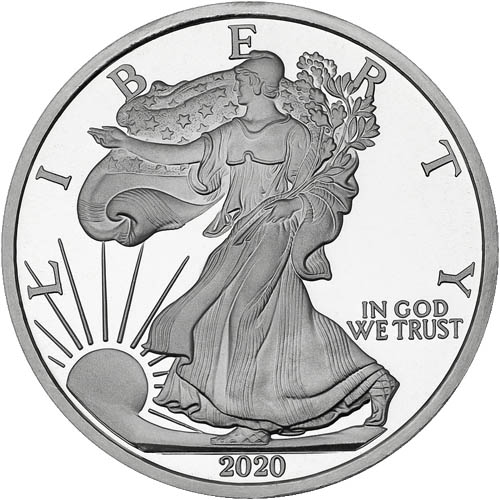 The design from the Silver American Eagle at the United States Mint comes from the history of US Mint coinage. Originally used on the US Half Dollar from 1916 to 1947 and now on the Silver American Eagle as of 1986, the popular design is also available on countless silver rounds from private mints across the country. Now, the 2020 5 oz SilverTowne US Eagle Replica Silver Rounds are available to you for purchase online at Silver.com.

Adolph A. Weinman developed the image of Walking Liberty in 1916 as part of a broader artistic contest at the United States Mint. The goal of the US Mint and the Treasury Department at the time was to find new imagery for the US dime, quarter, and half dollar. These were the last remaining coins, along with the US silver dollar, to be redesigned in the early 20th century.

Weinman’s depiction of Walking Liberty is believed by many to be influenced by a French coin. Known as the “sower,” the French coin depicted a woman in similar left-profile relief with a hand extended as she sows seeds into a field. Walking Liberty takes on a similar pose in this design as she walks toward the horizon with a hand extended as though she too is sowing seed.

The obverse field of the 2020 5 oz SilverTowne US Eagle Replica Silver Rounds, you will find the popular Walking Liberty design. The image of Walking Liberty depicts her figure walking toward the sun on the horizon as it crests over the peak of a mountaintop. This face of the round includes Liberty’s name, the national motto of the United States, and the date mark for this silver round issue.

On the reverse of 2020 5 oz SilverTowne US Eagle Replica Silver Rounds is a depiction of the heraldic eagle of the United States. Originally designed in 1792 by Robert Scot, the first Chief Engraver of the United States Mint, this image has been updated numerous times throughout American history. This is the latest design that was modified in 1986 by John Mercanti, the 12th Chief Engraver of the United States Mint. It depicts a powerful American bald eagle clutching the arrows of war and the olive branch of peace, with its head looking toward the olive branch. The bird has the US national shield on its chest, a ribbon reading “E Pluribus Unum” in its beak, and a triangular cluster of 13 stars above its head representing the original colonies.

2020 5 oz SilverTowne US Eagle Replica Silver Rounds are available to you with an individual plastic flip for shipping. Each round is in brand-new condition from SilverTowne Mint.