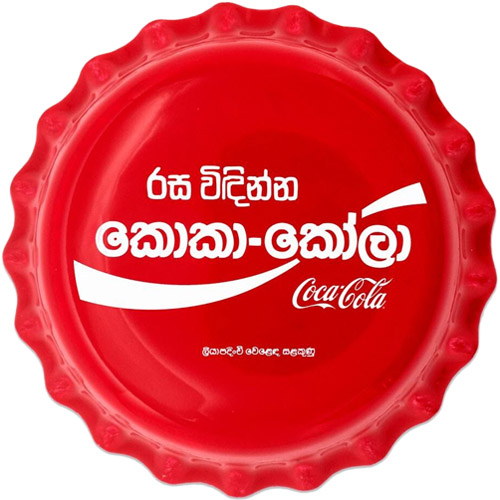 Sri Lanka is the latest nation to feature in the Global Edition bottle cap coin series. These beautiful silver bullion coins all have several features in common, such as red colorization and shapes that reflect the cap from a glass bottle of Coke. With a raised, colorized reverse and a sunken obverse, these coins are visually unique and brilliant. The difference in each one is the language in which the Coca-Cola script logo appears on the reverse. Today, 2020 6 Gram Silver Fiji Coca-Cola Sri Lanka Bottle Cap Coins are available to you online at Silver.com.

The Silver Global Edition of silver coins follows the popular 2018 release of the first-ever Coke-themed coin. That first release was also for Fiji and featured a silver coin shaped like a Coke bottle cap, with red colorization and white script on its reverse. This design theme was revived in 2020 for the Silver Global Edition, with the major change coming to the reverse. Rather than offering the Coca-Cola script logo in English only, each bottle cap represented the appearance of the product in a different country from around the world. Sri Lanka is the ninth nation to appear in the series.

All of the 2020 6 Gram Silver Fiji Coca-Cola Sri Lanka Bottle Cap Coins are available to you for purchase inside of commemorative tins. The red tin has the Coca-Cola logo and flashes of white on its surface areas, with a Coke cap enclosing the tin. The coin itself is housed inside with protective materials to keep it safe and secure. The coins come with a Certificate of Authenticity from the issuing mint.

On the obverse side of 2020 Silver Fiji Coca-Cola Sri Lanka Bottle Caps is the image of the Fijian coat of arms. The national seal has a number of different design elements included in it that point to the British colonial past of the island and the indigenous people who have called it home for thousands of years. For example, the shield is quartered by St. Andrew’s cross and topped within by a lion in a passant guardant pose. However, the shield features symbols of Fijian industry and culture in the quadrants, is supported by Fijian figures, and includes a Polynesian canoe with an outrigger above the shield.

The reverse face of the 2020 6 Gram Silver Fiji Coca-Cola Sri Lanka Bottle Cap features a depiction of the Coca-Cola white script logo. In this release, the Coca-Cola logo is written in the native language of Sri Lanka.

Please contact Silver.com with any questions. Our customer service team is available at 888-989-7223, online through our live chat, and using our email address.